Where to buy property in North Rhine Westphalia, Germany 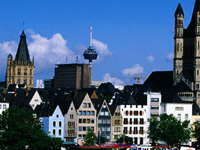 North Rhine-Westphalia is a prosperous state, with a population of more than 18 million. Over half the state consists of farmlands, a quarter woodlands.

The state has a long tradition as an industrial area in the Ruhrgebiet. It used to be called Germany's coalpit. Many defunct industrial places have now been transformed into cultural venues.

There is a wealth of cultural pleasures in this state, with some 68,000 monuments, 550 museums, and 130 theatres and opera houses. This state is also known for its large concentration of colleges, universities, and research establishments.

The state is rather densely populated. There are dozens of towns and cities lining the rivers Rhine and Ruhr and they all become busy during the carnival time which also marks the beginning of spring. Most of the towns have their quaint Altstadt, old town, where people go for beer and traditional fare, and maybe to hear an oompah band.

Founded over 2,000 years ago, Cologne is one of the prettiest cities in Europe and is renowned throughout Germany as a cultural centre for business and media. Located on the Rhine, Cologne offers the visitor great cathedrals, huge department stores, fantastic entertainment facilities and internationally renowned museums.

Cologne's twin spire cathedral is a massive example of French Gothic architecture. Although work began in 1248, it was only completed 600 years later, due to lack of funds, when a generous donation from the Prussian King Friedrich Willhelm IV allowed building to recommence.

While Churchill was congratulating his officers: "I send my congratulations for the success of the attack on Cologne and the Ruhr area, part of "the largest air attack in history", irreplaceable treasures in Cologne's centre were forever destroyed. Artistically valuable public buildings and dwellings under landmark preservation vanished from the scene, such as the Vanderstein-Bellen building on the Haymarket, the Guild House Unter Goldschmied, the Fa�binderzunft House on the Filzengraben, the Temple House on the Rhinegasse, the Overstolzen House on Eigelstein, the blocks around the Old Market, the Glockenstra�e, In der H�he, am Lichthof, the Marienplatz, the Stra�burger and the Salzgasse, the Mathias-Stra�e and Weberstra�e.

The cathedral suffered fourteen hits by aerial bombs during WWII. It did not collapse, but stood tall in an otherwise flattened city. Believers said it was divine intervention. Repairs were completed in 1956. The interior is breathtaking, with sweeping arches and magnificent pillars.

South of the Cathedral is a large pedestrian area which offers a fantastic shopping experience with a wide range of boutiques, designer shops, retro stores and thrift stalls and department stores. Nice residential areas are located within the ring, the Belgian Quarter (Belgisches Viertel) and Agnes Quarter (Agnesviertel). They are peaceful areas with some nice pubs and very central. Just outside the tracks is a ring of parks and green space, followed by another set of neighbourhoods, including Ehrenfeld, Lindenthal and Sulz, also central and more on the expensive side.

Dusseldorf is the capital of the state, and situated on the Rhine. Over 80% of the city was destroyed during bombing raids in WW2. However, Dusseldorf is a wealthy and elegant city, with plenty of investment from banks, insurance and mining corporations. In fact, Dusseldorf competes with Milan and Paris for fashion. The 'Ko', for Koenigsallee, is the main shopping area, an elegant shopping boulevard of chrome and glass arcades and is the longest shopping street in Europe.

For a great view of Dusseldorf there's the Rheinturm Tower, situated in the Rheinpark, which is over 700ft tall. On a clear day it is possible to see all the way to Cologne!

Outside the town centre is Schloss Benrath, a beautiful Rococo palace with a 60 hectare park. The palace was built in 1755 by Nicholas de Pigage. The interior of the palace has fantastic furnishings and decorative arts including stucco ornamentation in the style of Louis XVI.

Nice residential areas in Dusseldorf are Unterbilk, the former harbour area with lots of bars and restaurants. Karlstadt, which is directly on the Rhine with beautiful old houses and close to the Altstadt with its countless pubs. The poshest though is Oberkassel, on the other side of the Rhine, but within easy access to the centre through countless bridges. This is the villa and gardens land, many of which were built in the 30's.

Nobody really knows why this city on the Rhine became the capital of Germany after WWII from 1949-1990, but many stories abound. However, Bonn was a successful capital city. Both houses of the German parliament, the Bundestag and the Bundesrat, moved back to Berlin when it became the capital city again in 1990. However, many ministries and government offices remain in Bonn.

Bonn is the birthplace of Beethoven, and Clara and Robert Schumann lived and worked here. When Maximilian Franz (1784-1802) ruled, the city experienced a cultural heyday. He encouraged Beethoven to go to Vienna, and made the district of Bad Godesberg a spa, with a famous ballroom, the Redoute.

Maximilian Franz was the youngest son of the Empress Maria Theresia and the brother of the French queen, Marie Antoinette. He was reported to have said to his sister when terribly homesick, "Do you know, Tonerl, your hairstyle is really wonderful. It does me good because it reminds me of St. Stephen's cathedral back home in Vienna".

Queen Marie Antoinette died on the scaffold during the French Revolution. In 1794, the troops of that same revolution drove her brother from Bonn and out of his electorate. The French erected the Tree of Liberty in Bonn, and introduced the first paper money, the assignats. But what the French interlude really brought to Bonn was equality under the law and freedom of religion and trade.

Bonn became French, as did the whole left bank of the Rhine. In 1804, Napoleon came to Bonn for the first time was in a great hurry to view the walls and gates of the town to see if they were suitable for refortification. In 1811, Napoleon returned and took the salute at a parade on the Poppelsdorfer Allee.

Beethoven's birthplace is in the old town, just next to the town Hall, an impressive building in Rococo style built in 1737. Nearby is the palace of the prince elect , the Poppelsdorfer Castle. When Max Franz inherited the castle, he awarded it the status of a university in 1818. Many prominent students such as the Crown Prince Friedrich Wilhelm of Prussia, Emanual Geibel, Heinrich Heine and Hoffmann von Fallersleben studied here. The first professors were equally high calibre, such as August Wilhelm von Schlegel, Heinrich Hertz, Ernst Moritz Arndt and Georg Niebuhr.

To live in Bonn is to live in Bad Godesberg, the spa on the Rhine which remains pretty with lots of opulent Jugendstil villas, a pedestrian town centre. Bad Godesberg has a popular chamber theatre and the small theatre in the park. A side trip to the Aennchenplatz and a break at the Lindenwirtin is also delightful. The Museum Mile and government quarter features a multitude of museums and political institutions. The Museum Alexander Koenig, Haus der Geschichte (House of History), Art Museum and the Federal Art Exhibition Hall.

Poppelsdorf is a pretty and classical district. With its lovely houses dating from the 1871-73 and art nouveau periods, this area is one of the most popular residential areas. Around the Poppelsdorfer Castle and Botanical Gardens, there are many nice cafes, restaurants and pubs. It is where the university is, and so the neighbouring S�dstadt is just as popular, with plenty of student pubs and colourful street atmosphere.

The magical city district of Muffendorf borders Bad Godesberg and has pretty half-timbered houses and picturesque courtyards. This district once had a wine growing industry, though only a few wine bars remain.