Where to buy property in Nha Be, Vietnam 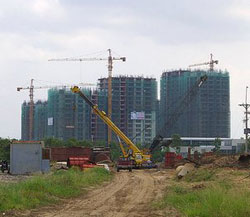 Nha Be is a district of Ho Chi Minh City. The area was once an important logistic and combat base for the U.S. Naval Establishment during the Southeast Asian Conflict. Nha Be was a natural choice as it sits in between Soi Rap and Long Tau, two major rivers between the port of Saigon and the South China Sea. It had facilities such as communications, storage, maintenance, messing buildings, depot-level repair, and administrative. It remained an important facility until its disestablishment in 1972, during the turnover to the Vietnamese Navy.