Where to buy property in Ngobe Bugle, Panama 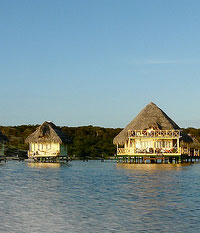 The Ng�be-Bugl� Comarcas is inhabited by two different tribes, the Ng�be, and the Bugl�. They have similar cultures but speak different languages. Today they are known as the Guaymi, and are Panama's largest indigenous group.

The province can give you a glimpse of early Panamanian life.� The tribe gained autonomy fairly recently, in 1997. It remains imperilled by colonization and deforestation, but autonomy is helping to preserve the Guaymi's culture.

The comarcas land is fertile. Crops include mangoes, rice, beans, oranges, and bananas. The Guaymi also raise chickens, pigs, and cattle. They hand-make chaquiras, once worn by the tribe's formidable warriors, but today the chaquiras produced by the Guaymi are more colourful, and are usually worn by women.