Where to buy property in Mumbai, India 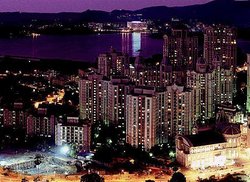 Mumbai or Bombay (as it was formerly known), is a narrow isthmus created by linking seven islands. This limits the available land, particularly in the south of this populous megapolis driving real estate values to dizzying levels.

Mumbai is often compared to New York for its contribution to India (20% industrial outputs, 40% of income tax collection and 70% of capital formation). In recent years Bollywood has overtaken Hollywood in the number of films made each year, and has become an important contributor to the service economy of India. Slumdog Millionaire, a movie which made a recent runaway success at the Oscars, is a Bollywood production.

Mumbai is well connected with the world and the rest of India. Its natural harbour transships over half of India's maritime cargo; its airports handle over 20 million passengers annually. Much of Mumbai's population of 19 million is on the move! Its twin corridor suburban train network carries 7 million passengers daily and its bus system transports another 4.5 million with austere efficiency.

It is home to the most important financial institutions such as the Reserve Bank of India, the Bombay Stock Exchange, and the National Stock Exchange of India. Mumbai is home to the corporate headquarters of many Indian conglomerates as well as the main India offices of multinationals.

Mumbai's restrictive geography, population, its archaic Rent Control Act and economic importance put pressure on housing. Expatriates typically pay between $3000 and $6000 per month in one of the prime areas listed below, plus a hefty $100,000 security deposit.

A renting scheme called "Leave and License" is entered into for a period of 11 months, which has the twin effects of reducing the Stamp Duty to a measly Rs. 20 ($0.30) and bringing the agreement below the radar of the Rent Control Act. Most of these properties are rented by corporates, with landlords preferring to do business with well known domestic and multinationals than with individuals.

Recently Avasia House, a beautiful 1920s villa in the elite Nepean Sea Road area, hit the headlines.� It emerged that the tenants were paying just $6 a month for their 3 bedroom apartments. Orbit Corporation, the developer that recently bought the property, paid $12.8 million to get each of the six tenants to leave.

The pace of life in Mumbai is fast, much like in New York. English is widely spoken. Mumbai is a cosmopolitan city, with a modern outlook on life. There are many bars, the bars frequented by foreigners mainly being in South Mumbai and the western suburbs. There are discotheques as well and many options for elegant or rustic dining.� It also boasts Asia's largest theme water park, Water Kingdom and a theme park called Essel World.

Social and sports clubs are the meet and greet places where the elite hobnob. The Bombay Gymkhana, Cricket Club of India, Willingdon Club, National Sports Club of India are a few of the noteworthy ones. The Royal Western India Turf Club oversees horse racing in Bombay, Pune and New Delhi. The Pune season is from July through to October and Mumbai's season is from November to April. The Derby weekend is the highpoint of Mumbai's season. The National Centre for the Performing Arts in Nariman Point stages a number of culturally uplifting performances all year round. Its unique hexagonal auditorium is a marvel of acoustics and was built by the pioneering American modernist, Philip Johnson.

Mumbai basically has two seasons: humid from March to October and dry from November to February. Winds from the north make it cool in January and February.

Most popular tourist sites are in the south, including the National Museum of Modern Art. and the Prince of Wales Museum. Mumbai has some examples of historic architecture, including Downtown Mumbai, which shows Victorian influence; the splendid British city within the walls of Fort St. George; and the Chatrapati Shivaji Terminus, which was originally named Victoria Terminus when it was built by the British over two centuries ago.

Mumbai's Inorbit Mall in Malad is generally considered the best mall in India. But none of the modern malls in this city are greatly different from those anywhere else in the world. More interesting are Mumbai's bustling street markets, but they are incredibly crowded. Street vendors line some of Mumbai's streets. Mahatma Gandhi Road is best for cheap clothes. Crawford Market offers a variety of imported items, Dabboo Street for leather goods, Muhammad Ali Road for its oriental perfumes (itar) and intricate embroidery and brassware.

Mumbai also has some parks and gardens. The Five Gardens, popular among locals for walking, is rather chaotic in the evening, but it is surrounded by attractive Art Deco and Neoclassical buildings. From Mumbai Port Trust Garden can be seen the port, the naval yards, and a beautiful sunset. There is a great view of the Marine Drive from the "Hanging Gardens" on Malabar Hill.