Where to buy property in Moscow, Russia 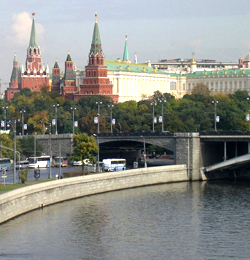 Moscow is the country's economic heart, Russia's wealthiest and most prosperous city, the home of nearly all of Russia's billionaires - and Forbes Magazine reported in 2008 that Moscow has now more billionaires than any other city in the world.

Moscow is also the most populous city in Europe, with 10 and a half million residents. Utility costs and income tax rates are quite low, but otherwise the cost of living in Moscow is high; in 2006 it was cited as the world's most expensive city for foreigners to live in.

Since the dissolution of the Soviet Union, Moscow has been rejuvenated. The many churches of this pre-Communist centre of religion have been renovated and spruced up. Some Party buildings have been repurposed as commercial buildings.

While life in Moscow is freer now, police presence has increased and security has become heavy due to terrorist attacks in 2002 and 2004. It is also bitterly cold here in winter, but the snow adds to the picturesque appeal of its old cathedrals and palaces.

Nevertheless, Moscow is an enjoyable place. It offers lively nightlife and plenty of shopping. Tverskaya Street is the most popular place for both nightlife and shopping. The more upscale bars and restaurants are found on the southern end of this street. Nearby Tretyakovsky Proyezd is home to designer boutiques.

The city is named after the Moskva River, a tributary of the Oka River which in turn is a tributary of the mighty Volga. The winding Moskva provides the city with sandy beaches and has been an important trade and transportation route for centuries.

Moscow is encircled by four ring roads, two of which are old city boundaries: the Garden Ring (now a bit of a misnomer, as there are no longer any gardens along the road) and the Boulevard Ring (also a misnomer, since it does not complete a circuit), which replaced the defensive walls of the city centre in the early 19th century. The Moscow Ring Road (also known as MKAD) defined the city limits until Moscow started annexing territories outside it in the 1980s.

This vast and densely populated city has ten administrative divisions, called okrugs. Eight okrugs radiate from the central okrug, which includes the heart of Moscow, the Kremlin. One more okrug, Zelenogradsky, is separate from the rest.

Moscow's okrugs are further subdivided into districts, which total 123. 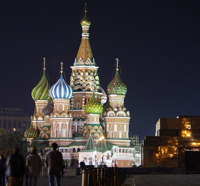 At the heart of the Central Administrative Okrug is the Kremlin, Russia’s political centre. Inside its thick walls of red brick are palaces and churches.

At 230 years old, the triangular Senate Building is one of the newer buildings in Moscow. It is the official residence of the President. The even newer State Kremlin Palace—completed only in the 1960s—is now a concert hall.

Inside the Kremlin is Cathedral Square, on which stands the golden-topped, Russian Orthodox Cathedral of the Assumption, the oldest and largest of the Kremlin’s many churches.

The Kremlin faces the broad, cobblestoned expanse of the famous Red Square, which is flanked on another side by the multicoloured onion domes of St Basil’s Cathedral, perhaps the greatest and most familiar symbol of Moscow and Russia. The cathedral, built by Ivan the Terrible in 1555 to commemorate his annexation of the states of Kazan and Astrakhan, is probably the finest and most famous example of ornate Russian Orthodox architecture in the world.

Encircling the Kremlin are different neighbourhoods and sub-districts, each with its own character and significant sites. Bordering Red Square is the old neighbourhood of Kitai-Gorod, which has many administrative buildings, restaurants, a multitude of churches, and some old merchants’ courtyards.

Tverskaya Street, emerging from the north of the Red Square and going to St Petersburg, is the most important road in Moscow and one of the most vibrant. It is lined with cafes, nightclubs, museums, and shops and is bustling day and night.

The innermost ring road, the Boulevard Ring, is composed of a series of boulevards with a 10-kilometre-long park cutting through it. This green area has a few playgrounds, a pond, and several paths that Muscovites enjoy strolling on. This place is also called Bely Gorod, or "White Town," after the white defensive walls erected around it in the 16th century. Two centuries later, the walls were taken down and replaced by the boulevards, lined with trees and iron lampposts, but the name remained. The trees were later cut down by Napoleon’s army for fuel in 1812, but new lindens and poplars have replaced them. Some places of interest here include Pushkin Square, a vibrant and popular gathering spot. For boating in the summer and skating in the winter, there is the pond Chistiye Prudy in the east.

Close to the centre is the neighbourhood of Zamoskvarechye, literally "the land beyond the Moscow River." It consists of a group of islands to the south of the Moscow River housing settlements that are over 800 years old. These were originally the camps of visiting Mongol envoys. Eventually locals came to live here. Various craftsmen were drawn to these islands when Mongol domination ended and built simple churches here. It eventually grew from a craftsmen’s village to a fashionable neighbourhood for merchants in the 19th century and became the site of mansions and the first art museum in Russia, Tretyakov Gallery. Later industries popped up alongside the houses and churches. Some historic sites are found here, like Bolotnaya Ploshchad, which was once a square where public executions were performed but is now a quiet park. The neighbourhood’s main attraction, though, are its many galleries, antique shops, and cafes, which give it its artsy and casual character. The nearby Novokuznetskaya, Tretyakovskaya, and Polyanka Metro stations provide access.

The Petrovka district, which issues eastward from Tverskaya, has a traditional character. It has an old bathhouse and a couple of monasteries. Restaurants old and new, plus shops are found here as well. To the southeast of Petrovka begins the Ukrainian Quarter, which has architectural gems, cafes, and souvenir shops along its steep and winding roads among embassies and drab government offices. To the northwest is the vibrant Arbat district situated among elegant streets.

There are fewer attractions outside the Garden Ring Road, mostly former country estates turned into museums or concert halls in a typical urban setting.

The residents of this area enjoy a higher life span than most people in Moscow, probably due to good education and social standing. The population of the Central Okrug is varied, but it has several wealthy communities.