Where to buy property in Monaghan, Ireland 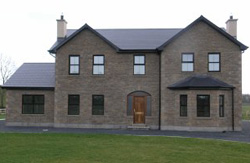 Monaghan County’s name comes from the Irish Muine Cheain, or “the land of the little hills”. These hills are drumlins, mounds formed by glaciers during the Ice Age and found throughout the county. Monaghan has a varied terrain, marked by a number of mountains, rivers, lakes and a few patches of forest. Evergreen forests dominate the landscape, the indigenous woods having been ravaged by farming and forestry practices. One of the county’s most popular recreational areas is Lough Muckno, a lake surrounded by forest, which together cover 364 hectares. With a leisure park that’s open all year, Lough Muckno is a great place to enjoy water sports and golf, tennis, canoeing and riding.

The county has a population of around 52,000. It has five large towns, including it’s the county seat, Monaghan. There are also some excellent museums here, especially the Monaghan County Museum, whose art and historical exhibits have earned both national and European awards. Some of the architectural gems the county is known for are Monaghan’s Regency Gothic Church and the late 18th century Market House, which is made of limestone and decorated with beautiful carvings. Another fine structure is Saint Joseph’s Catholic Church, which was designed by one of Ireland’s foremost 19th century architects, J.J. McCarthy.