Where to buy property in Mizoram, India 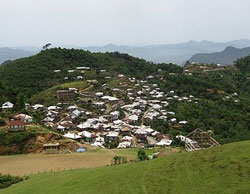 The great majority of Mizoram's population are a culturally interlinked group of tribals, collectively known as the Lushais/Lusais (people who play with heads) or Mizos (mi= people, zo= hill). 87% of the population is Christian.

Mizoram achieved statehood in 1987 after a struggle led by the Mizo National Front (MNF) from 1961 onwards. It was Rajiv Ghandhi's ascent to power which inaugurated a new era of central government moderation, which allowed the MNF to disband.

Mizoram has a high-rising hills, separated by rivers and gorges, and lush with tropical greenery. The Blue Mountain, is its highest peak at over 2 km high. Its high altitude tempers Mizoram's tropical climate, making the weather mild throughout the year.

In winter the temperature stays between 11-21 degrees Celsius, while in summer it never gets hotter than 29 degrees Celsius. In May to September it rains heavily.

The beautiful capital of Mizoram, Aizawl, is a peaceful secluded town on a hill. It is the state's centre of religion and culture.

The people are warm and cheerful, and maintain their colourful traditional practices. English is widely spoken.

There are 9,000 Mizoram Orthodox Jews, who consider themselves one of the lost tribes of Israel, a historically spurious claim which has nevertheless been accepted by one of Israel's two chief rabbis. About 1,700 Mizo Jews have moved to Israel, where they live in the occupied West Bank.