Where to buy property in Loja, Ecuador 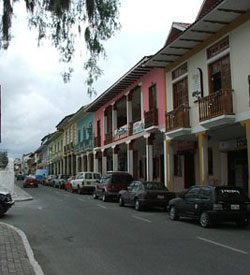 The dry, subtropical province of Loja is a mix of hills, mountains, páramos, cloud forest, and jungle. It is popular as a crossover point from Ecuador to Peru and as a top destination for health buffs.

Loja’s Podocarpus National Park is one of the most biodiverse places in the world. It is home to a lot of endemic plant and animal species that can be found nowhere else on Earth. This feature is highly attributable to the melding of the cool Andean and tropical Amazonian climates, which has resulted in a unique atmosphere that encourages these unusual species to thrive and grow.

Sugar and coffee are Loja’s main agricultural products. It sizable cochinilla (cochineal) farms supply the textile and cosmetics industries with dye obtained from the insects. Loja also has gold mines that have caused considerable damage to the environment.

The cheery city of Loja is the capital of the sierra region’s southernmost province. It is known for its music; Lojanos can often be heard singing as they go about their everyday activities. Even the local police has its own band, with a regular weekend gig in the town plaza. Loja has two major universities, a law school, and Ecuador’s premier music academy, the Conservatorio Nacional de Musica.

Loja is the first Ecuadorian city to become electrified, thanks to a hydroelectric dam completed in the late 19th century. Its houses and historical buildings are characterized by an overly colonial style. Public artworks such as frescoes, statuaries, and huge tile murals are scattered throughout the capital.

The parish of El Cisne is a well-known religious site in the highlands, dominated by its huge, white, 18th century Gothic French-style basilica. It also has a religious museum exhibiting Christian art and the sequined clothing of the Virgen del Cisne. Every year, the Virgin’s statue is carried on pilgrims’ shoulders for more than 70 kilometres, a three-day journey that begins in El Cisne and ends at the cathedral of the city of Loja.

The laid-back village of Vilcabamba has been a popular tourist destination in the last several years. It has good accommodations, great restaurants that use the freshest local ingredients, and several crafts shops. Its main attractions, though, are health-related.

Due to its reputation as the “Valley of Longevity,” more and more foreigners are buying homes in Vilcabamba, whose native residents have a lifespan that rivals that of the world’s longest-lived people like the people of Okinawa in Japan, Abkhazia, and Hunza in Pakistan.

Many in the international raw vegan community regard Vilcabamba as the healthiest and most practical place to live on Earth. For one thing, the best air to breathe in the world circulates exclusively in this particular valley. Due to the hundreds of cascading waterfalls surrounding the town, Vilcabamban air is suffused with negative ions which are believed to be highly beneficial to human health due to their regenerative, detoxifying, and curative properties.

For another, Vilcabambans are active and have a diet that is relatively low in calories and derives its fat from good sources.

Another factor that accounts for the above-the-norm lifespan and good health of its locals is the presence of naturally pre-filtered water in the area.

The rural canton of Saraguro is famous for its woven products. The Salasaca Indians are a very traditional people, sticking with age-old customs in dance and music and dress. The black poncho they wear is their continuous fulfillment of the mourning oath their ancestors made when the Spanish murdered the much-revered Atahualpa, who died nearly 500 years ago.