Where to buy property in Kurzeme, Latvia 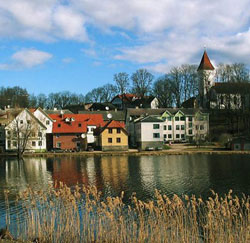 The Kurzeme district is situated on the left bank of the Daugava River, an area that has long been overshadowed by the more exciting and culture-rich right bank. Nevertheless, it has its attractions. The district has several residential neighbourhoods of varying character: traditional Pārdaugava, modern Imanta, and the increasingly prestigious and highly-developed Ķīpsala.

Pārdaugava is across the river from Old Riga, hence its name which literally means "over Daugava." Here you can find many wide-open green spaces, and even some lovely blocks of 19th-century buildings. But Pārdaugava also has its share of dull Soviet-era housing blocks and dilapidated industrial estates—this has traditionally been a working-class suburb. On the plus side, Pārdaugava residents can get by on a lower cost of living than they could on the right bank districts.

The Holy Trinity Church of Pārdaugava is one of the neighbourhood's most interesting sights. It is a 17th-century Russian Baroque building that features the famous onion domes of that style.

Āgenskalns is an old Pārdaugava neighbourhood that largely went up between the late 19th and the early 20th century. Some of the original wooden buildings remain—standing alongside modern apartments. The striking red brick building of Āgenskalns Market, built between 1911 and 1923, figures as the neighbourhood's key landmark.

Ziepniekkalns is a Pārdaugava neighbourhood, but it is a more modern area compared to Āgenskalns. It mostly consists of Soviet-style, 10-storey concrete apartment blocks built during the late 1980s and early '90s. However, many buildings dating to the early '60s still remain.

Torņakalns is another Pārdaugava neighbourhood. Torņakalns means "Tower Hill"—so-called because a fortified tower stood here in the middle ages. The tower is long gone, however.

Unlike Soviet-built Ziepniekkalns, Torņakalns is an elegant neighbourhood of old mansions, parks and gardens. From the late 18th to the early 19th century, this was the place where wealthy Riga townsmen built their rural retreats. But later in the 19th century, it became industrialised, with mills and factories. Today, it is home to the rustic green spaces of Mary's Creek Park (Mārupes parks) and Archady's Park (Arkādijas parks).

Ķīpsala is an island on the Dagauva River just across from Riga's Old Town. It has become a centre for recent high-rise development, and is currently seen as a desirable residential area. Land plots for private houses fetch high prices here.

Imanta is a modern neighbourhood set on what was formerly pine forest. Part of the old forest has been preserved in Imanta's central Anninmuiza Park, and the Kleistu Forest just to the north. The Sampetera Forest is also found close by.