Where to buy property in Kuna Yala, Panama 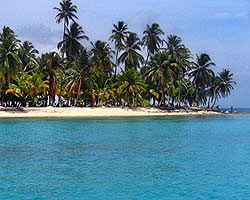 Kuna Yala Comarcas is an autonomous territory, or comarca, of Panama.� Its name means "Kuna mountain", and the area is populated by the Kuna tribe. Authority is held by three chiefs, also known as caciques.

Unlike the Embera Comarcas, the Kuna Yala Comarcas counts on tourism as a primary industry. Formerly known as San Blas, the province is littered with hotels run by the tribe. Visitors can sign up for ecotours, which allow you to visit a Kuna village and spend time with the Kuna. Or go snorkelling or fishing, as there are a number of islands with spectacular beaches.

The Kuna number about 35,000, with the majority living in the San Blas Islands, and on the mainland in the Madungandi reservation.

The Kuna speak their own language called "Tule".� In the Madungandi reservation there is little Spanish proficiency.�

The Kuna launched rebellion in 1925 against government policies banning traditional dress and religious customs, which resulted in the establishment of a semi-autonomous territory (Comarca). This special status granted Kuna control over 365 small coral islands of the Archipelago (San Blas), and 2,357 km2 of coastal region in Darien. �

Today tourism is an important source of income for the Kuna, and is directly under the supervision of the General Kuna Congress, in reaction to previous abuses by Panamanians.

The Kuna have control of the administration of laws and social policies, under the jurisdiction of the federal Panamanian government. �Because the Comarca de San Blas is a peninsula, the Kuna have mostly remained outside of western influence. �

Kuna political life is dominated by a congress, conducted by a chief and the interpreter. Chiefs derive authority from their knowledge of sacred chants, interpreters from their ability to interpret the chants for the people. �

Kuna elected officials preside over meetings. There are two main types of meetings. The first is the chanting meetings, open to all members of the community. These chants emphasize cultural figures, teach values, and the Kuna moral code. On the other hand, the talking meetings are formal gatherings of the eldest men, and they discuss laws and settle disputes.�� Agreement is reached by consensus, rather than majority vote.
�
The Kuna have a matrilineal society, i.e., inheritance passes through women (this does not mean matriarchy, obviously, since "talking meetings" are men's affairs). A young man, after marriage, must live in his mother-in-law's house and work for several years under apprenticeship to his father-in-law. Daughters are prized because they will eventually bring additional manpower into the family.

Due to United States influence and the influx of tourists, English is being spoken more and more by Kuna in the San Blas Archipelago. The set of islands give you plenty of water activities, while the thick forests are a paradise for those who want to experience true wilderness.