Where to buy property in Kuna de Wargandi, Panama 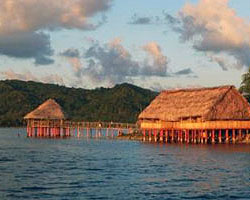 The Kuna tribe inhabit a comarca called the Kuna de Wargandi, which occupies a land area of 775 square kilometers. A fairly young comarca, Kuna de Wargandi was established in the year 2000, and is situated in the Pinogana District of Darien Province, with Nurra as its capital.

The Kuna speak their own language called "Tule".� The Kuna have a matrilineal society, i.e., inheritance passes through women (this does not mean matriarchy, obviously, since "talking meetings" are men's affairs). A young man, after marriage, must live in his mother-in-law's house and work for several years under apprenticeship to his father-in-law. Daughters are prized because they will eventually bring additional manpower into the family.