Where to buy property in Krasnoselsky District, Russia 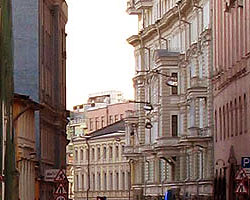 Several major housing projects are being planned in Krasnoselsky by the city administration. Currently, this 11,500-hectare area is home to a population of over 300,000 and numerous small-scale industries. There are few commercial enterprises here, and only two shopping centres.

The district takes its name from a village absorbed into its territory, Krasnoye Selo (literally, "beautiful village") which was established in medieval times. Some say there was once a royal palace in this area, which is unlikely; but it is certain that the Tsar Peter I used to go boating on the large artificial pond that was once here. After railroad construction began here in the 1850s, the pond was eventually covered up.

Krasnoselsky has a relatively healthful environment, with more than 600 hectares of green space. Among its major parks are South Seaside, Sosnovaya, and Polezhaevsky. Some of the tourist attractions in south and south-west St Petersburg, such as palaces and the Strelny, Peterhof, and Oranienbauma parks, can be easily reached from here by public transport. But generally there are problems with public transport links from this area. It has no Metro of its own and the nearest stations, in Kirov, can only be reached by bus. There are also problems with travelling by car because of traffic congestion during the peak times.

Homes are cheaper here than anywhere else in the city. Sosnovoy Polyana is an especially popular low-cost housing neighbourhood. About a fifth of the homes here consist of typical 1970s-period brick structures.