Where to buy property in Komarom-Esztergom, Hungary 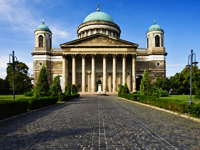 Kom�rom-Esztergom borders Slovakia. It is Hungary's smallest country, but its second most densely populated. �This region has some of Hungary's most beautiful landscapes and most mountainous areas, full of thick forests and rocky ravines.� The bend of the Danube River here draws many vacationers.

Its capital is Tatab�nya, a colourless city with many communist housing blocks.� A copper statue of the Turul bird, commemorating the Hungarian conquest, stands proudly in Tatab�nya. With a 15m wing-span, the monument represents the mythical messenger eagle of the Gods, drawn from Maygar folklore.

A much more important (though smaller) city is Esztergom, home town of Hungary's first king, Saint Stephen, and the capital of Hungary from the 10th till the mid-13th century.� It is the historic centre of Catholicism in Hungary, and today the seat of the Catholic primate. You will see numerous monuments and relics testifying this.

Also notable is the neoclassical Basilica of Esztergom, built by master architect, J�zsef Hild - the largest church in Hungary.

Inside the cathedral is the Bak�cz chapel, one of the most valuable works of the Hungarian Renaissance.

Close to Tatab�nya is Tata, the seat of the Esterhazy palace, built by famous baroque architect Jakab Fellner, who also built Tata's Parish Church, and its Piarist house. �

In Kom�rom, there are three military fortresses. The oldest is the Csillageród (Star fortress). Guarded by a wide moat, it was built on mediaeval foundations. Those visiting the fortresses of Monostor and Igm�nd on the hand can spend the day wandering through their corridors and loop holes, or meander through Monostor's museum.