Where to buy property in Kagithane District, Turkey 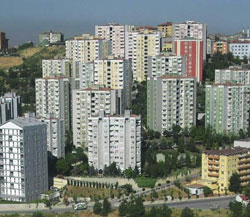 Lying along the stream which runs into the Golden Horn, Kağithane was once a small traditional village with a few cottages. As its population grew, its few economic resources became insufficient to provide the needs of its residents. The community became impoverished over time.

In the 1970s, Kağithane’s economic situation got worse as it became the centre of left-wing support and the focus of political violence. Lacking adequate support for the construction and improvement of its social infrastructures, the district continues to be underdeveloped and neglected. Many of its housing areas are nothing but ramshackle apartment blocks.