Where to buy property in Jembrana, Indonesia 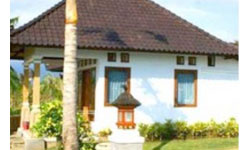 The regency of Jembrana (a prime area) is the most sparsely populated area in Bali. It is visited least by tourists, and is not affected by the happenings going on in other parts of the island. The quiet villages here are made up of small homes covered with flowering shrubs. The capital of Negara is where some of the oldest prehistoric humans in Bali were found.

An interesting note about traditional art forms in Jembrana is that to the locals here, size is everything. This explains the huge musical instruments such as the giant bamboo xylophone and large oversized drums. Another interesting event that happens here is the mekepung bull races festival of Banyubiru and Delodbrawah villages. It celebrates harvest day that comes during the dry season. It is a race between two beautifully decorated carts pulled by water buffaloes, as they scramble to a finish line 2 kilometres away. The contestants are judged on their speed as well as their style.

Delodbrawah and Medewi beaches are the most popular in the area. Delodbrawah has beautiful black sand and is a favourite among the local residents. Medewi on the other hand is a stony beach with long rolling waves and more popular for surf enthusiasts.

Much of the area is covered in lush jungles, and part of the West Bali National Park is here. It is a quiet reserve that envelopes much of the mountains, forests and coasts of the regency. The long-extinct Balinese tiger once roamed these lands and is also where the jalak putih, or the rare white Balinese starling can sometimes be spotted. Menjagan Island, part of Jembrana regency is also part of this national park. This island is said to have the best reefs in Bali and is a favourite snorkelling and diving spot. The park has a zoo and a crocodile farm.

The Rambut Siwi temple complex sits on top of a cliff which overlooks a glistening black sand beach and lush paddy fields. Found in two caves, the temple received its name from the first offering it received from its builder. Dang Hyang Niratha offered his hair, hence the name Rambut Siwi, or “hair worship”.

Negara, Jembrana regency’s capital, is best known for its bull races or mekepung, an entertaining sport which originated from Madura Island in Java. The large town is clean and pretty, and horse-drawn carriages are still in use.

There is a Bugis community in Negara’s southern border, the Loloan Timur, where traditional stilt houses built to withstand high tides still remain.

The longest left-point break in Bali is in the remote district of Medewi, located in Jembrana regency. The thinly populated and least developed fishermen village is best known to surfers from Asia and Australia. The early morning surf is great, but the month of August brings the biggest waves.

Medewi beach has a scenic rocky coastline and black sand. The surrounding area is beautiful, with coconut plantations and grazing fields for cattle. Though the beach doesn’t get crowded, there are a number of cottages and bungalows around.