Where to buy property in Jasz-Nagykun-Szolnok, Hungary 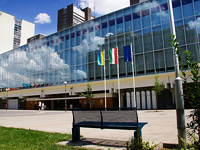 Legend has it that Atila the Hun is buried in the river Zagyva, in J�sz-Nagykun-Szolnok county. �Certrainly, there are several relics from age of the Hungarian conquest in this area, including the horn of Lehel, the Hungarian chieftain who killed the Emperor Conrad, thus uniting his people.

The county's capital is Szolnok, a bustling town, and the busiest port on the River Tisza. The town was completely destroyed during the revolution led by Prince R�k�czi in the early 18th century. Szolnok started to prosper again in the 18th century, due to control of the river Tisza. Szolnok has the oldest railway station in Hungary, a neoclassical building.� Notable too is Szolnok's Museum of Aviation (Rep�l-m�zeum).�

Nearby villages such as the town of Ab�dszal�k, which are on Lake Tisza, are havens for bathers and water-sports aficionados.

The county is well known for pottery. The town of Karcag was put on the map by award-winning potter S�ndor K�ntor. J�szber�ny in the J�szs�g, and Mezt�r and T�rkeve are areas known for the talent and skill of their craftsmen.