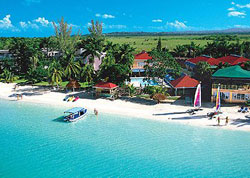 Colourful is perhaps the word that best sums up Jamaica—its culture, its cuisine, its beaches and reefs, its people. Jamaica is the home of reggae, Rastafari and Bob Marley. Of sand and surf, palm trees and plantation houses, ganja and jerk chicken.

This Caribbean island 90 miles south of Cuba was also the home of the Taino and Arawak peoples. It was discovered by Columbus in 1494, and the Spanish colonized it and defended it against constant pirate raids. In 1655, the British wrested the island from the Spanish, and kept it in their possession until the nation gained its independence in 1962.

Over the following centuries, African slaves were brought in to work the sugar plantations to replace the natives that had died out. The slaves were emancipated in 1833 and there was an uprising in 1865 following the drop in sugar prices. Living conditions in the island improved when Jamaica became a British colony the following year and continued to improve when bananas replaced sugar as the main crop. Jamaica finally won independence in 1962 and is now a democratic state.

For a country its size, a great variety of religions are practiced in Jamaica. It holds the world record among countries for having the most churches per square mile. Whatever their religion, Jamaicans practice it with a visible and audible passion. Among the distinctive religious groups in Jamaica are the Rastafari, who wear vibrant costumes in red, green, and gold and chant to the beat of drums. Drums as well as wind and string instruments are used to produce the famous reggae music of Jamaica, whose thumping rhythms demonstrate a fusion of African and European influences. Reggae has become popular worldwide. Some of Bob Marley’s songs are international classics—the anti-authoritarian anthems “Get Up, Stand Up” and “I Shot The Sheriff”, the wistful “No, Woman, No Cry”. 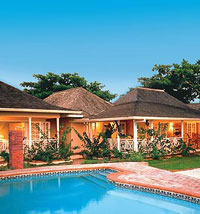 Given the variety of its influences, it is not surprising that Jamaican cuisine is extremely diverse. Native, African and European ingredients are combined to produce the varied and spicy dishes that are the hallmark of Jamaican cuisine. Some specialties are famous around the globe, like Jamaican jerk sauce used to flavour roast meat, while others are unlikely to be seen outside the country—like stews made with cow’s foot or goat’s head. But some of the best flavours in Jamaica are the simplest: The island’s mangoes and bananas are among its major products and are wonderfully flavourful just as they are.

The produce owes its quality to the excellent climate. The mountainous island has an annual average temperature of 27 degrees Celsius. It is especially hot in summer, from May to September. It is fortunate that Jamaica abounds in fresh water—rivers and mountain springs, including therapeutic mineral springs.

In Jamaica, the wealthy elite live in posh enclaves, but many more Jamaicans live in poverty, occupying shanty towns in Kingston, Montego Bay and elsewhere. Poverty has given rise to still more problems—the increase in crime, illiteracy and teen pregnancy, which the government is making little headway against. 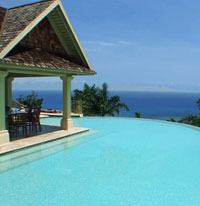 But even when it’s in an economic trough, many have access to good water, most babies are born with the aid of skilled health care professionals, and very few belong to the lowest poverty bracket. Furthermore, Jamaica’s situation has improved with the growth of its tourism. A variety of immigrants have been drawn to the island, and it is more multicultural than ever, with Chinese, Indians, Syrians, Jews, and Lebanese adding to the racial pool.

Jamaica is the largest English-speaking island in the Caribbean and the third largest in size at 10,991 square kilometres. It is divided into the counties of Cornwall, Middlesex and Surrey, which are further subdivided into 14 parishes. Kingston is the smallest yet the most important of these parishes, as it is also the capital.