Where to buy property in Innenstadt IV, Germany 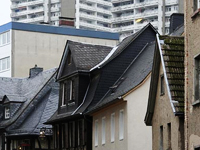 Bornheim is also known as das Lustige Dorf (The Merry Village), and is a lively place. This area was favoured by a liberal community of freethinkers in the 1970s, and continues to have a creative and bohemian character, although young professionals make up most of its population these days.

Students also enjoy this area, which has become quite diverse, with a mixture of traditional, posh, trendy, and alternative establishments. This area has the highest population of all Frankfurt's districts, and has a harmonious multicultural atmosphere.

There are some 19th century Gruenderzeit buildings and charming half-timbered houses. There is plenty of good shopping, especially in the pedestrian zone Bergerstrasse, with many old-fashioned as well as new and trendy eateries, bars, and cinemas. At the square "am Uhrt�rmchen" there is a farmer's market on Wednesdays and Saturdays, selling the products of local craftsmen and bakers, as well as fresh produce and meat.

Some popular events take place in the traditional spring and autumn festival Dippemess, celebrated by a carnival. The Holzhausenpark where Holzhausen Castle is located often features concerts and exhibitions. Guenthersburgpark is also in the area. This neighbourhood is served by the U-Bahn metro, and is only 6 minutes from downtown Frankfurt.

Ostend (pop: 26,000) has become a trendy district, having formerly been a derelict industrial area. It is now home to many modern media companies, advertising, film producers and design companies, and has entertainment venues, as well as hip residential developments. Artistic and designer establishments dominate Hanauer Landstrasse, which is also a fashionable night life area. Well-known brothels can also be found in Ostend. On a more family-friendly note, it is also home to the Ostpark and the Zoo.

It has a mostly young population, quite diverse, ranging from creative types to professionals. Many loft apartments can be found as a result of the many empty warehouses. There is a mix of prewar and postwar buildings, plus some new construction.