Where to buy property in Innenstadt II, Germany 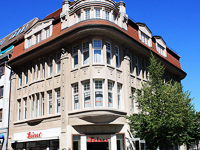 Bockenheim (pop: 31,000), a pleasant suburban area, has a great number of original buildings which survived the wars. More modern architecture dominates its western side. Some of the settlements were renovated in the 1990s.

The district is quite classy. Being near the exclusive Westend district, it has some grand houses and developments in the outskirts of Palmengarten. The Diplomatenviertel (ambassadors quarter) boasts upscale villas. At its heart is one of Frankfurt's two surviving medieval watchtowers.

The area used to be home to Johann Wolfgang Goethe Universit�t, now in IG-Farben-haus in the northern part of Westend. Many of the bars, caf�s, and bookshops that catered to the students of the old university still remain in the area. Leipziger Stra�e is a pleasant street to talk a stroll and is still frequented by students and has many interesting little stores. There are also some parks: Von Bernus Park, Palmengarten, and BUGA Gelaende.

Westend (pop: 25,000) is an upscale area with some original Art Nouveau and Wilhelminian houses among its many skyscrapers. There are also some buildings with preserved, elegant 19th century Gruenderzeit facades. Properties in this area are among the most expensive in Frankfurt. There are good restaurants and caf�s here, as well as many banks and offices, some housed in old buildings. During the week, the area bustles with the energy of professionals on the go.

This is a very green area, with two major parks: Gr�nebergpark, a favourite open space to relax in, and Palmengarten, with its extensive collection of plants.

The area is also rich in major academic institutions, including the Johann Wolfgang Goethe Universit�t, Frankfurter Musikhochschule, and the Sigmund-Freud-Insitut.

The district's history is quite interesting. It began in the 19th century as a villa quartier for the affluent merchant class. Similar to Paris, wide avenues and parks were built. Although Westend was spared carpet-bombing by the Allies, the whole district was declared as a "restricted zone" by the Americans, who established their headquarters in the IG area close by, and used the villas of Westend as housing for their GI's, putting barbed wire around the whole district.

The city saw riots in the early 70's when plans to develop the area became known. Many citizens - initiatives were formed, and together with students people took to the streets to oppose the plans. Some nasty events took place, due to the involvement of the then active red army fraction, with a couple of American soldiers killed. However, thanks to these riots, this districts kept its historic and leafy flair.

The population of this district is quite dense now.

On the peripheries linking Westend to Innenstadt, is the financial district of the "Bankenviertel". Heavily bombed during the second world war, it was rebuilt as a modern banking quarter, the so-called Mainhatten or Bankfurt. You can work in Frankfurt's financial centre yet live in great housing in Western.