Where to buy property in Indonesia 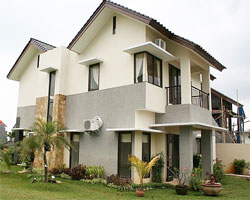 The Republic of Indonesia is the fourth most populated country in the world. It is the largest archipelagic nation, with 17,508 islands scattered across the equator, though only 6,000 are inhabited.

The five largest islands are: Java, Sumatra, Kalimantan (shared with Borneo), New Guinea (shared with Papua New Guinea) and Sulawesi. Its geographical location on the Pacific, Asian and Australian tectonic plates make the country prone to volcanic eruptions and earthquakes.

The most recent disaster due to seismic activity was the Yogyakarta earthquake in 2006 and the tsunami in Aceh (northern Sumatra) in 2004. Ironically, volcanic ash is the reason why the lands are agriculturally fertile, sustaining the large populations in Java and Bali.

Indonesia’s tropical climate has two distinct monsoonal seasons: wet and dry. Because of its size, geography and climate, the country supports the second highest level of biodiversity in the world.

Unfortunately, because of its dense population and fast industrialization, Indonesia also faces many serious environmental issues such as illegal deforestation, over-exploitation of marine resources, wildfires that cause heavy smog, and pollution that comes from traffic congestion, garbage management and water and waste services.

Indonesia has a long and colourful history. It has been an important trade region since the 7th century; this is why Indonesian culture today has Indian, Chinese, Malay and Arabic influences.

Indonesia’s greatest western influence is from Europe, having been colonized by the Dutch for three and a half centuries. At the end of World War II, Indonesia achieved independence. It underwent, and sometimes still continues to fight, violent challenges brought on by the democratization process, corruption, separatism, natural disasters and rapid changes in the economy.

Today, Indonesian society is made up of about 300 native ethnicities. The largest group are the Javanese, who are culturally and politically more dominant than the other groups. National pride exists mostly in its regional identities and while groups are generally harmonious, ethnic, religious and social clashes have triggered terrible violence in the past.

Though 5% of the population is Chinese Indonesian, they control a large majority of the country’s wealth. This unfortunately has contributed to a lot of resentment against this influential ethnic minority, and has even led to anti-Chinese violence.

Indonesia’s diverse ethnicity brought forth rich forms of art. From the tediously carved Balinese furniture, to the elaborate intricacies of batik textiles, Indonesia is culturally famed throughout the world. Many cultural treasures have been influenced by Indian, Malay, Chinese, Islamic and European sources. For one, the wayang kulit (shadow puppets made from goat skin) as well as traditional Balinese and Javanese dances contain Hindu mythology and reflect its culture.

Indonesian cuisine, which varies by region and ethnicity, is well worth mentioning. The palate of choice though is more typically spicy than anything else, as well as dishes that used coconut milk, fish and chicken. The most internationally known Indonesian dish is nasi goreng, a stir-fried rice usually served with grilled chicken, peanut sauce, fried egg, and deep-fried crackers called krupuk.

The largest city in Indonesia is the capital, Jakarta, the country’s centre of all things economic, cultural and political. It is a crowded city, the 12th most populous in the world. Like many bustling Asian metropolises, Jakarta has an impressive skyline. Imposing skyscrapers, chic shopping areas and fancy condominium residences are in the heart of the city.

Jakarta’s energy slows as one leaves the city centre and enters the suburban residences, though it is no less crowded. Jakarta is also not without its unique quirks – such as the large highways with deceivingly modern facades hiding the squatter areas behind it.

Outside of cars, motorcycles, buses and taxis, Jakarta has an automated rickshaw called the bajaj which is a popular and cheap mode of transportation in the city’s back roads and suburban areas. One will also note that road etiquette in Jakarta doesn’t exist; traffic laws are merely suggestions and drivers are aggressively undisciplined. Sitting in non-moving traffic is the norm, as are beggar-filled muddied streets lying perpendicular to glitzy luxury brands and the heavy, humid air filled with the smells of open sewage systems and pollution.

Jakarta is not usually a popular destination for tourists, more of a jumping point to get to Indonesia’s other attractions. But those that do get to spend a few days in the capital may surprise themselves. Those who can see beyond what first may come as a shock, will enjoy everything else Jakarta has to offer such as a pulsing nightlight, tasty cuisine, rich culture, and great shopping in modern shopping complexes.