Where to buy property in Huechuraba, Chile 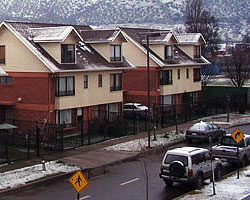 Huechuraba in the northwestern part of Santiago is one of the province's poorest communes, with many residents benefiting from government welfare and social programs. It has always been a poor district, but recently it has begun to be surrounded by new, gated communities occupied by affluent residents, so that Huechuraba is now more a mixed community than a totally low-income one. Though they are separated from each other by walls and gates, the rich and the poor of Huechuraba have forged employer-employee relationships and even friendships, despite their vast differences in income and social status.

Huechuraba also has a large evangelical community and a monument to Martin Luther. The Espacio Riesco Convention Center is located in the district.