Where to buy property in Ho Chi Minh, Vietnam 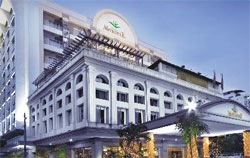 Vietnam’s largest city sits on the Saigon River and is laced with hundreds of canals and smaller rivers. The Port of Saigon, built in 1862, became a prominent trading centre for Japanese, Chinese and Western traders. It is still an established port that can take in ships weighing up to 30,000 tons, rare for an inland river port.

HCMC has changed, and continues to change, at an incredible speed. Paddies were quickly transformed into factory areas. Large buildings tower over the streets. With a rising population of over 9 million, it is here where the divide between the rich and the poor is the most extreme as well as the most obvious. Nonetheless, the bustling city has an allure that appeals to some foreigners, especially those that find its sister city Hanoi rather sedate. The war-era attractions, the garish appeal of its risqué night scene, the grand palaces and old pagodas keep HCMC exciting.

Before the 16th century, Ho Chi Minh City, then called Prey Nokor, was a sleepy fishing village built on a huge swampland. By the 17th century, the area became home to a great number of refugees running from the war up north. It took on the name Saigon when the French came in the 19th century and turned the city into the Paris of the Orient. It was the capital of Cochinchina, a region that enveloped parts of Vietnam, Laos and modern-day Cambodia.

The French extracted what they could from the region and changed what they could in Saigon. Grand French buildings and beautiful boulevards were built. The French remained until they lost at the Battle of Dien Bien Phu in 1954. When the nation split into two sides, Saigon remained the capital of South Vietnam, which established itself as the Republic of Vietnam in 1955 with the aid of the U.S government. As the war drew to an end, Saigon once again found itself the refuge of thousands who fled Northern Vietnam. The city finally fell in 1975, a tired shadow of its former self. It was renamed Ho Chi Minh City a year later, a fitting tribute to the late leader of the North Vietnam.

As the communist regime took over, so did re-education and repression. Those with means did their best to leave the country all through the late 1970s and early 1980s. By the late 1980s, an economic policy known as “doi moi” began the landslide of changes that can now be seen. The vibe in the city has now changed with passionate younger generations empowered by education. Buildings climb higher and higher, piercing the skyline. International retail outlets and hotels continue to replace old government buildings. Ho Chi Minh City does not look to be slowing down any time soon.

The legacy of the French is still very much present in much of the architecture in HCMC. The heart of the city boasts beautiful broad boulevards and old French colonial buildings. The Saigon Notre-Dame Basilica (Vương Cung Thánh Đường Sài Gòn or Nhà thờ Đức Bà Sài Gòn), inaugurated in 1880, is a cultural and spiritual representation of France’s presence in the East. The style is foundationally Roman in pattern, with the exception of the cathedral’s Gothic vault. A steel skeleton supports the grand building made up of two central bays, two tall belfries, two side corridors, a semi-circular shrine, tall pillars and high stained-glass windows which allow natural light to emanate into the sanctuary.

Other great examples of French colonial architecture in the city are the City Hall, the Reunification Palace, the Municipal Theatre, the City Post Office, the State Bank Office and the City People’s Court.

Some remarkable eastern architecture can also be seen in Ho Chi Minh. There are pagodas all over the city. One of the most popular is the Giac Vien Pagoda, an example of architecture from the Nguyen dynasty of the 19th century as well as pagodas typical to the southern region of Vietnam. It has 60 wooden engravings made of gold and jack wood. Some plates are engraved with birds, others with fruit. These engravings are the only ones that currently exist in Vietnam, and attract not only tourists but scholars and religious. It is a centre for conferences on Buddhism as well as worshipping ceremonies.

Cu Chi Tunnels, where the Vietnamese began their operations of the Tet Offensive in 1968, is one of most popular sites in the city. This historic guerrilla warfare landmark is 350 square kilometres of underground tunnels that link sleeping quarters, hospitals, meeting and other social rooms. The Tunnels were built in the late 1940s as the local army’s defence against the French and later on against the Americans. Many of the tunnels today have been reconstructed, with wider tunnels built to prevent claustrophobia.

Ho Chi Minh has the best food in the country, both in local and fusion cuisine.