Where to buy property in Haryana, India 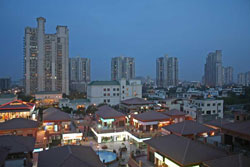 Haryana is a major growth engine of today's industrialized and technologically-developed India, with the city of Gurgaon a hub for the information technology and automobile industries. The state has India's 3rd highest per capita income, being both industrially and agriculturally rich.

Gurgaon is a major business process outsourcing (BPO) centre, and has an active information technology industry, with organisations like Tata Consultancy Services IBM, Hewitt Associates, Dell, Convergys, United Healthcare and NIIT setting up back offices or contact centres. Haryana now ranks 3rd among Indian states in software exports. It is also a film making centre, since the success of the film Chandrawal in 1984. Gurgaon is home to Maruti, India's largest car maker, and Hero Honda Limited, the world's largest maker of two-wheelers.

The state is seeing a massive influx of immigrants from Bihar, Bengal and Nepal.

Haryana is dominated by the vast Yamuna-Ghaggar plain. In its southwest there is a desert-like sandy plain. In the northeast are the Shivalik Hills and in the south, the Aravali Range.

Haryana's climate is typically northern Indian, with temperature extremes of up to 50 degrees Celsius in summer, the heat peaking in May-June, and as low as 1 degree in December-January. Nearly 80 % of the rainfall occurs during the July-September monsoon. At times there are major floods.