Where to buy property in Hajdu-Bihar, Hungary 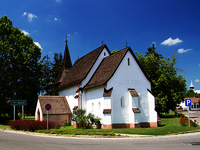 Hajd�-Bihar borders Romania. Its capital is Debrecen, the educational, cultural, transportation, economic and conference centre of the Northern Plain counties.

Sandy hills and rolling plains make up the topography of this county. It has many thermal springs, indeed medicinal spas are arguably the county's main attraction.

Another popular attraction is Hortob�gy National Park, the oldest national park in the country. Yearly, it welcomes thousands of visitors interested to taste the area's shepherd and folk traditions. It has the largest grazing ground in Europe, where one can watch shepherds cracking their whips at herds of grey cattle and spiral-horned Racka sheep. Mangalica pig herds also graze here. �The park's nine-hole bridge is Europe's longest stone bridge. �

The preservation of folk arts in Hajd�-Bihar is very important to the locals. �Pottery, for example is a craft pursued today, as is honey-cake making in Hajd�b�sz�rm�ny and Debrecen.

Around Debrecen, one finds plaiting masters, making wicker baskets, rugs, hats and bags. Leather is� another popular craft. Many festivals in the county showcase Hajd�-Bihar's cultural traditions and crafts.

The area has the oldest clerical building in the county, the 13th century gothic Church of Ny�racs�d, whose frescoes are a popular attraction.

The Reformed Church of Debrecen is of particular interest. Built between 1805 and 1820, this "Great Church" in classical style is a symbol of not only Hungarian reform, but a symbol of Debrecen as well. It is impressive but simple from the outside, but the pulpit inside is richly gilded. It is a national shrine, as Hungary's independence was declared here in 1849. �

After visiting it, visitors wander over to the Calvinist College of Debrecen. This neoclassical institution is a grand building, embellished with columns and beautiful archways.