Where to buy property in Gyor-Moson-Sopron, Hungary 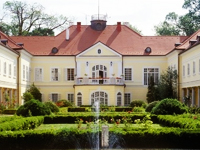 Gy�r-Moson-Sopron County was created in 1950, by the merger of Gyor-Moson and Sopron. The county's seat is Gy�r.

Many of the county's cities and hamlets are rich with historical relics, architectural sights, dreamy landscapes, colourful festivals, all served with a helping of Hungarian hospitality.

In Fert�d there's the "Hungarian Versailles", the Esterh�zy Palace, a complex of grand baroque buildings, embellished with Venetian mirrors, majestic statues, frescoes, fountains and other pieces from this period. Joseph Haydn once lived and worked in this imperial complex.

Gy�r attracts thousands of visitors due to the wealth of its baroque buildings. The P�sp�kv�r (Bishop's Castle), built on a Romanesque foundation, is an example. Apart from the baroque attractions in Gyor, the city's Town Hall is another well known building with its high central tower. Gyor has an enchanting centre because of these beautiful baroque buildings.

Near Gyor is the Benedictine Abbey of Pannonhalma, the county's pride. Built on top of gothic and Romanesque remains, this amazing group of baroque buildings has neoclassical elements such as tall tower, from which it offers grand views of the rolling hills around it.� The abbey has a 360,000 volume library, as well as paintings by Dutch painter David Teniers and Hungarian painter Mikl�s Barab�s.

The town of Sopron rivals Gyor in sites of interest. The Toztorony or Fire Tower for example, has become a well known symbol of the city. It is noted for its beautiful balcony that allows those who peer from it, a view of the whole city.

The county can be accessed by both car and train. There are major roads to Budapest, and Vienna.