Where to buy property in Gujarat, India 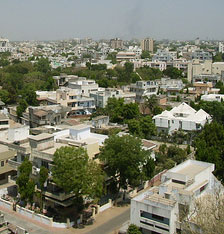 Gujarat is one of India's most prosperous states, with a per capita GDP significantly above India's average. The state produces 19% of India's industrial output, 25% of its textiles, and 40% of its pharmaceutical output.

Gujarat is partially surrounded by the Arabian Sea and is famous for its beaches, including Ahmedpur Mandvi Beach, one of India's best beaches, in the historic port town Ahemdpur Mandvi.�Kutch Mandvi Beach is another beach in a historic port town, Maharao of Kutch. Chorwad Beach is a favoured spot for exciting boat rides. For a peaceful getaway, the island of Diu off the Saurashtra coast is ideal.

Gujarat is the only place in Asia naturally inhabited by lions. These Asiatic lions are found in Gir Forest National Park and some other parts of the state as well. There are also panthers in Gujarat's mountains and plains.

The northwest is largely desert.

Gujarat's capital Gandhinagar, on the river Sabarmati, is home to renowned educational and research institutes.

The city is spacious, green, and well-planned, with harmonious architecture. Although the city of Ahmedabad is the state's true commercial and cultural heart, Gandhinagar's pace of life is less rushed. Yet many large international companies have offices here. It is easily accessible by road, by railway and by air. About

About 89% of Gujarat's population are Hindu, and 9% are Muslims. In February 2002, communal violence claimed a thousand lives - 790 Muslims and 254 Hindus. The riots followed the Godhra Train Burning incident, where 58 Hindu Kar Sevak pilgrims were burned alive on a train that caught fire, allegedly set by a Muslim terrorist.