Where to buy property in Guayas, Ecuador 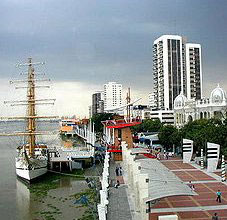 Even with its hot tropical climate, 3.5 million people have still chosen to settle in Guayas, Ecuador’s biggest and most prosperous coastal province.

However, Guayas cannot seem to keep up with the massive wave of new residents. Guayas has the highest rate of urbanization in the country, and overpopulation has become a problem in its capital city, with many of its migrants ending up in shanties. Agriculture, mining, manufacturing and oil and gas drive Guayas’ economy.

The ancient village of Valdivia can also be found in Guayas. It has a museum that showcases an important collection of artefacts from 3000 BC. The small town also has a stunning beach that accommodates only a few guests. Those who love to go on pilgrimages may want to visit the Sanctuary of Blessed Virgin of Estrella de Mar in Olón. The open-walled sanctuary rests on the top of a cliff overlooking Olón’s beach. The Virgin Mary is believed to have cried there once. 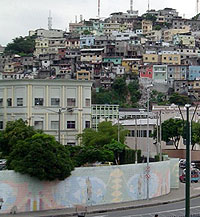 Ecuador’s main port and largest city is also its most important and influential economic centre. And thanks to the architectural makeover it underwent a few years ago, Guayaquil is also now a top tourist destination.

Guayaquil’s export and import infrastructures meet international standards; it is for this reason that the Guayas capital receives 90% of the country’s imports and sends off 50% of its exports.

Multinational companies have also found firm and solid ground in Guayaquil. Groomed for business and tourism, the city’s growth in the recent years has been quite constant.

More than 10 years ago the city of Guayaquil was rife with crime; however, the crime rate has greatly decreased thanks to the tourist areas’ being heavily guarded, such as the town’s secure riverside boardwalk. Still, the sensible person—whether a tourist or a local—should know to take precautions when out on the town. 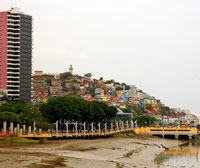 Pelucolandia in Guayaquil’s northeast has a long chain of restaurants that offer a wide variety of good food. Another popular food haunt is the area in the vicinity of Urdesa along Victor Emilio Estrada, full of restaurants, cafés and bars. Also located in this neighbourhood is Teatro del Angel, which stages comedies on weekends.

The General Villamil Playas may be Guayaquil’s only remaining major beach, but its impressive waterfron pretty much makes up for the number of glorious beaches the province of Guayas had to hand over to the new province of Santa Elena when it was created. The waterfront, Malecón 2000, is the city’s recreational and cultural centre. It is flanked by the Guayas River and the 200-year-old Torre Morisca, a tower that provides a wonderful panoramic view of the city.

The green, spruced-up commercial centre not only has bars, restaurants, and food courts, an IMAX theatre, the shopping mall Centro Commercial Malecón, and 230 individual stores that sell everything from apparel to jewelry to appliances within its territory. It also has a number of parks, museums, and historical landmarks.

Occupying four city blocks near the Guayas River is the Parque Centenario, marked in the centre by the big Column of October or of Liberty. Atop the column is a figure standing with a torch in its outstretched hand. It is surrounded by statues of the country’s men of consequence—reminders of Ecuador’s history, struggle and triumph, encouragement its citizens to emulate the patriotism of its great heroic sons. The park’s walkway and lawns have numerous shady areas that offer cool relief from the scorching heat of the sun. To the west is Casa de Cultura, which regularly holds film festivals and specialized classes in the arts.

The Parque Seminario is the home of dozens of iguanas. Simon Bolívar’s statue, the park’s centrepiece, has for its daily company these lizards of different sizes and hues. The reptiles, some of which are five feet long, are either idling all over the place or hiding in the trees or behind plants. The park’s local and foreign visitors often give these reptiles a sweet treat: slices of mango they buy from the park’s vendors.

Near the rotunda is the imposing Moorish Clock Tower that used to warn the city of sudden pirate attacks. Not very far is Guayaquil’s City Hall, an imposing, neoclassical palace that is regarded as one of the greatest architectural achievements of the city. The Parque Sucre serves as a hedge to the Palacio Municipal and the Gobernacion or the Ministry of the Interior Building, the latter reflecting a mix of various architectonic styles. 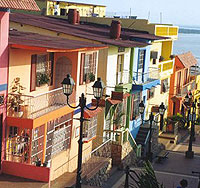 Another pleasant place to visit is the Malecón Gardens, huge parks that house Ecuador’s different botanical species. Along the Gardens’ promenade are small squares and gazebos that invite the tourist to relax and appreciate the nearby lagoon, fountains, and streams.

Guayaquil has several malls that carry trendy foreign brands and the Mercado Artesanal or artisan market in Malecón, the city’s souvenir shop whose merchandise comes from all over the country.

The ultramodern Malecón captures the character of the capital: Modern yet historic. Traditional but progressive. Commercial and yet cultural. In this sense Guayaquil seems to be the peninsular counterpart of Andean Quito, although the two rival cities would probably vehemently deny any shared similarities.

Located in the centre of Guayaquil’s downtown district are a host of museums, including the Central Bank Museum, which contains relevant pre-Hispanic household wares, textiles, and ceramic. The building is hard to miss due to the huge colourful paintings propped all over its exteriors.

The Malecón del Salado has its own park and a number of restaurants serving typical Ecuadorian fare. It might be rather low-key compared to the other Malecón, but the air is fresh and the sunset a glorious technicolour. 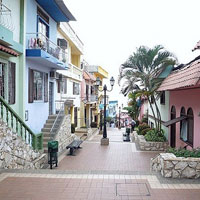 In 1982 the district of Las Peñas was declared a cultural patrimony of the nation for its 20th century urban-architectural structures. The oldest church in Guayaquil can be found here: the Church of Santo Domingo, also known as Saint Vincent Church, which was erected in 1548. Santo Domingo’s interior water well is reputed by its parishioners to have healing properties.

Las Peñas is where Guayaquil was actually founded. It is the artistic centre of Guayas’ capital city, where noteworthy art pieces are exhibited in 400-year-old wooden houses. Ecuador’s most distinguished artists have also made Las Peñas their headquarters and put up their own studios there. The brightly painted district, with its Spanish-style buildings, historic cobblestone streets and well-preserved early republican architecture, is a worthy inclusion in one’s cultural itinerary.

What’s cool about Las Peñas is that you get to eat seafood in their floating restaurants on the Guayas River while watching the city’s picturesque river traffic—huge ocean liners, banana merchants paddling their rafts and peddling their goods at the same time, fishing boats, and dugout canoes all trying to keep everything smooth and flowing in the coast’s busy waterway. Some of the neighbourhood’s bars are the hippest, most bohemian, and most welcoming in Guayaquil.