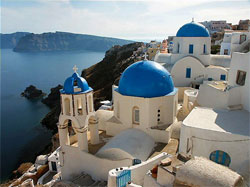 The home of the gods, the birthplace of democracy—Greece has contributed so much to the development of Western culture and civilization. It is also a country of considerable beauty, a land of mountains and plains. Greece consists of a mainland on the southern end of the Balkan Peninsula and more than 2,000 islands scattered mostly throughout the sparkling Aegean Sea.

Its cities and towns bear the evidence of its rich history and culture, from the stately ruins of the Parthenon in Athens to the blue-domed churches and whitewashed houses on the island of Santorini. In many places, the rocky countryside gives way to cultivated expanses of vineyards, citrus orchards and olive groves. These produce the staples of Greek cuisine that you can try out in the tavernas— small restaurants that serve local food and the traditional Greek drinks, retsina and ouzo.

Greece has a very long history. The earliest civilizations in the land were the Minoan civilization on Crete and the Mycenean civilization in the mainland, who thrived until the end of the Bronze Age, circa 1100 B.C.

The emergence of the city-states two centuries later led to an unprecedented cultural boom in the islands, with extraordinary achievements in architecture, philosophy, mathematics, the arts, and literature. Ancient Greece was conquered by the Romans in 146 B.C. In 330 A.D., the emperor Constantine chose the Greek city of Byzantium as his new capital.

Renamed Constantinople, it became the second Rome, in a time when Christianity enjoyed imperial preference. It was the centre of what became known as the Eastern Roman, or Byzantine, Empire. The empire lasted for over a thousand years, until Constantinople fell to the Ottomans in 1453.

Greece was part of the Ottoman Empire until the first quarter of the 19th century, when they briefly became a republic, and then a monarchy under European rulers. Despite having been able to shake off Ottoman rule, the Greeks continued to struggle against the Turks well into the 20th century.  After World War I, Greece fought the Turkish nationalists led by Mustafa Kemal. This led to a massive population exchange between the two countries. The interwar period was a time of great political instability.

In World War II, Greece repelled the Italians but eventually fell to the Germans. The post-War period saw rapid economic growth under the US-funded Marshall Plan, but politics remained a bitter fight between democratic forces and the military and the monarchy. The 1960s saw a series of military coups, and in 1974 Turkey invaded Cyprus, causing the collapse of the military government.

Modern Greece really dates from 1975, when a democratic republican constitution was established, and the monarchy was abolished. Since then, Greek politics has seen a peaceful alternation between the social-democratic Panhellenic Socialist Party (PASOK) and the more free-market New Democracy party. Greece rejoined NATO, which it had left after the invasion of Cyprus, improved relations with Turkey, and joined the EU in 1981. The country has experienced remarkable economic growth in peace.

Greece is divided into 13 administrative divisions, or peripheries. It has a population of around 11 million, a quarter of which live in its capital, Athens.