Where to buy property in Gozo, Malta 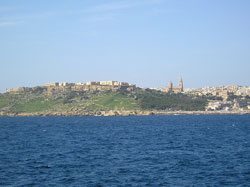 Malta Island’s smaller and more rustic neighbour, Gozo, does not lack charm and personality. It has carved its own identity separate from the mainland: it is greener, more rural, and has a more tranquil vibe, with its mixture of quiet countryside and beachfront Mediterranean scene.

Gozo is old, and has been settled since Neolithic times at least. The island’s ancient, freestanding Ġgantija megaliths—two temples that count among the world’s oldest religious structures—are some of the most impressive relics of prehistory in Europe.

Many believe that Gozo was also the Ogygia of antiquity, where the Greek hero Odysseus spent seven years in enchanted bliss with the sea nymph Calypso before he was able to return home. Today, Calypso Cave—said to be where the nymph kept Odysseus—is one of Gozo’s tourist attractions.

Gozo’s traditions and cultural calendar are different from those of the mainland, and Gozitans are staunchly proud of their culture. They also warmly welcome visitors to their island.

Water is ever present at any point on the island; the rich coastline brings in tiny creeks, secluded beaches with red sand, turquoise bays, limestone stretches and high cliffs overlooking the clear waters.

Gozo Island is a favoured tourist destination, thanks to the scenery and some of the world’s best dive sites—the most stunning of which is the Blue Hole, a large rock pool and diving area  under the Azure Window, a 50-metre rock arch in the cliffs through which you could see the blue sky.

Gozo is also Malta’s bread basket. Its hilly, rugged landscape and fertile land consistently produce a bounty of fresh produce. The countryside is dotted with old stone churches and farmhouses (some of which have been turned into rustic travellers’ accommodations), and many well-heeled Maltese have chosen to build summer homes on this peaceful island.

Gozo’s glorious coast is a favourite with sunbathers. Inland, visitors go on gastronomy tours to sample the local fare and go on wine and olive oil tastings, relax and get pampered at spas, or try the island’s many restaurants and bars.

The slower progress of Gozo’s urbanization has allowed it to keep its laid-back character, and travellers come here to enjoy a change of pace.

The rural island’s capital is the impressive citadel of Victoria. Although named for the occasion of Queen Victoria’s jubilee in 1897, Maltese and Gozitans still call it Rabat. “Rabat” means ”suburb”, and this is exactly what the town is. It is more of a daytime tourist destination rather than a place to stay as there is only one guesthouse and few places to eat in the evening. 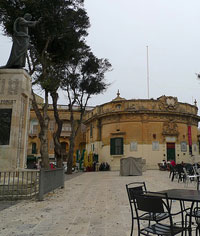 Victoria, or Città Vittoria, is the capital of Gozo. It is still known to the locals by its old name, Rabat. Every other point on the island is at most only 15 minutes away from the town, which is a pleasant, laid-back town of Baroque buildings and neat squares.

The town centre is Pjazza Indipendenza, where residents and visitors fill the open-air cafés and visit the open market during the day. Not far from the open market is the magnificent St. George's Basilica. It is surrounded by narrow streets that processions wind through every July when the saint is honoured with feasts and celebrations.

The centre of Gozo is the fortified hill town appropriately called Citadella. It sits on a promontory over the town of Victoria and the coast. The Knights of St. John used Citadella to shelter the population in times of war.

In addition to the more functional military structures that make up the former citadel, Cittadella has some historic buildings that are fine examples of medieval and Baroque vernacular architecture, including museums and law courts. But the most important of these is the 17th century Cathedral Church, seat of the Bishop of Malta. I ti s said that the cathedral was built on the ruins of a temple to Juno.

Munxar is a small, traditional village situated between two valleys. It is a close-knit community, having grown from some old families in the area. It currently has a population of about 700.

Xlendi is a town surrounded by high cliffs and Xlendi Bay in Gozo’s southwest. It is a popular swimming and diving area in the summer. Xlendi is also a fishing village. Fisherman’s boats are a common sight in the harbour. South of the bay is a commercial area with hotels, restaurants and bars. Xlendi’s sandy beach is small but popular.

Għajnsielem is a quiet fishing village. But overlooking Mgarr Harbour is an arresting remnant of a militaristic past: the imposing Fort Chambray, set on high ground. The Gothic Lourdes Chapel and the grotto to Our Lady of Lourdes are also on the waterfront.

Set within a 17th century fortification built by the Knights of the Order of St. John, the Fort Chambray development is a brand-new residential complex overlooking the Comino Channel and Xatt l-Ahmar Bay, set against Gozo’s southern cliffs. It is only a few minutes away from the port of Mgarr and from Gozo’s commercial centres.

In consideration for the historical importance of the area, the new developments are low-rise buildings whose design does not jar with the older architecture of the area. The blocks are built by local workers using traditional methods and materials, imitating a typical village environment. Many of the residences are two- or three-storey villas with modern interiors and wide terraces. There will be communal pools, conference centres, a hotel and a casino. Though it has only completed the first of its three phases of construction, residents are already moving in. Fort Chambray is traffic-free.

The hilltop town of Xagħra is the earliest settled part of Gozo. It contains two of the most notable Neolithic ruins in Malta—the mysterious Ġgantija megaliths and the underground temple known as the Xagħra Stone Circle. The megaliths stand at the edge of the plateau
Not far away are Xerri's Grotto and Ninu's Cave.

The Church of our Lady of Victories, with its richly Baroque interiors, is at the centre of the village.

Xagħra overlooks Ramla Bay, but the village itself does not have a lot of entertainment options, except for a toy museum and an interesting and perfectly functional old windmill. 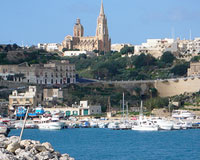 According to Maltese tradition, Ramla Bay is where Odysseus, the hero of Homer’s Odyssey, was trapped by the nymph Calypso for seven years—to be exact, he was trapped in Calypso Cave, a network of caves that overlooks the beach and extends into the sea. It has become quite the tourist spot, but sadly, because of poor maintenance, this means it is littered with trash and other detritus left behind by visitors.

Nadur is a fast-growing town. Its name means “look out”, and the hilltop town was a prime lookout point against pirates in the past. Its dominant building is the Church of St. Peter and St. Paul, a Baroque masterpiece taking up on one side of the village square.

Nadur has two coastal areas, the bay of San Blas and the Dahlet Qorrot inlet. There are some boat houses and summer homes near the water in Dahlet Qorrot.

San Blas Bay is a small, rocky bay with a red sand beach. Terraced green hills roll down to the water, so it’s hard to get to the beach by vehicle. Bathers proceed there by foot, and thanks to its being inaccessible by car, it’s quite a tranquil place.