Where to buy property in Galicia, Spain 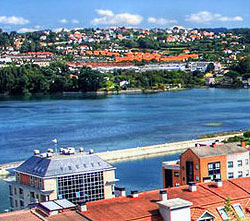 Galicia, on the Atlantic coast, is not typically Spanish in appearance.  Its verdant rolling landscape is lovely, nevertheless, with its hills and low mountain ranges, and numerous little rivers. The climate is quite mild, though cold in the mountains, where there is snow in winter.

The most visited site in Galicia is the extraordinary baroque masterpiece of Santiago de Compostela Cathedral. It attracts pilgrims paying homage to St. James (whose body is supposed to be there).

Yet Galicia’s romantic coast is the main draw for holidaying tourists, with its many fishing villages doubling as resort towns. It is known as “The Seafood Coast”, because with its many rias or estuaries, Galicia has excellent fishing.

Galicia’s mountains have kept inner Galicia isolated and poor. It has few cities, and they’re mostly small (though many villages). Of Galicia’s population of 3 million, 90% now live on the coast, as the inland inhabitants have abandoned the mountains, to head to the coast or the big cities.