Where to buy property in GalÃ¡pagos, Ecuador 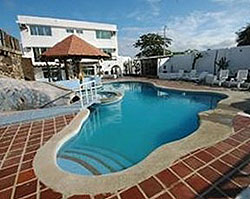 About 600 miles away from the mainland are the Galápagos Islands, which gained worldwide renown with the publication of Charles Darwin’s The Voyage Of The Beagle and The Origin Of Species.

The Galápagos was named after its huge tortoises, whose shells resemble an old Spanish saddle. It currently has 60 named islands, most of which are uninhabited. The inhabited islands have a combined population of 40,000.

The whole region boasts of a truly unique, well-protected menagerie. Ninety seven percent of the territory is a national park, with the remaining 3% being inhabited areas such as those on San Cristóbal, Santa Cruz, Isabela and Floreana. The climate in the Galápagos Islands is not cool but, in the words of Darwin himself, “far from being excessively hot” either, with seasonal rains and generally dry weather.

The Galápagos remains inextricably linked with Darwin. The English naturalist visited the islands in 1885 to to study their rich and unusual plant and animal life. His lingering fascination with the Islands’ unique wildlife led to the inception of his famous, formerly controversial text in his native England. To this day the flora and fauna that served as inspiration to the formulation of Darwin’s law of natural selection still thrive in the Islands.

The archipelago is the home of giant tortoises, marine and land iguanas, seals, fish, sharks and the hundreds of species of birds that Ecuador has become famous for. 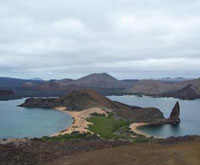 A trip to Galápagos isn’t cheap, especially during peak season. Though the islands can produce their own meat, seafood, fruits, and vegetables, most of the foods served in Galápagos are imported, hence the steep price of common commodities that are normally quite cheap on the mainland.

There are snakes in the Galápagos, but they are non-venomous. The iguanas seem to be as populous as the locals, so the tourists can forgo the island-hopping and just stick to mainland adventures if they are fearful of these reptiles that are allowed to go forth and multiply with abandon all over the archipelago. But if you’re not bothered by them, you’ll find having these reptiles sunning next to you on the beach an interesting experience in itself. 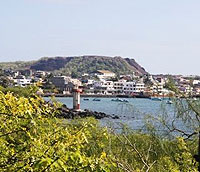 San Cristóbal, or Chatham, is one of the Galápagos’ oldest islands. If you work here, chances are you’re either a fisherman or a government worker.

The star animals in San Cristóbal are the frigate birds, though as with the rest of the archipelago the island has its share of iguanas and seals too.

Located in San Cristóbal is the Galápagos’ laid-back capital, Puerto Baquerizo Moreno. The port city has an airport, hotels, visitor information centres, buses and taxis. Puerto Baquerizo is perhaps the most developed town in the region. The Centro de Interpretacion relates the archipelago’s history and explains its endemic biological life.

Internet charges are a whopping $6-7 per hour. It is better go surfing longer with a board than with a computer on San Cristóbal. 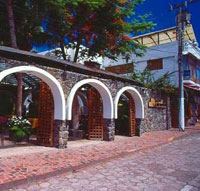 Otherwise known as Indefatigable Island, Santa Cruz has the largest human population in the Galápagos. It is regarded as the archipelago’s main tourist site because the Galápagos National Park Service headquarters and the Charles Darwin Research Station, which jointly manage the tortoise-breeding centres, are here.

But the giant tortoises are not the dominant species on the island. Marine and land iguanas can be found virtually everywhere here—on the beaches, in restaurants, small hotels, and the homes of the locals themselves. If you think Guayaquil’s Parque Seminario doesn’t have enough iguanas, then Santa Cruz will be iguana paradise to you.

The most touristy town of Santa Cruz is Puerto Ayora, which has restaurants that offer seafood, local specialties, grilled meat, vegetarian food, and international cuisine. Bars, discos and salsatecas, grocery stores and souvenir shops can also be found in this charming picturesque town. The town has a few churches and a hospital as well.

Isabela is the Galápagos’ largest island. Though it is not as touristy as the other islands, it still boasts of a nice beach, a number of tall, active volcanoes, and the biggest colony of giant tortoises in the archipelago. Accommodations are only available at Puerto Villamil, Isabela’s small yet beautiful main town, which has a lovely beach and a small lagoon.

Punta Albemarle and Elizabeth Bay are great dive sites, but those who prefer swimming and snorkeling will find Punta Tortuga more enjoyable.

The island of Floreana has a population of less than a hundred. Accommodation is only available on Puerto Velasco Ibarra with the Wittmers, a German family who moved to the island in the 1930s to escape the Nazis, and their family history is an interesting account they share with their guests. They also have only telephone on the island.

The Black Beach, the Asilo de la Paz in the highlands and the shores of Punta Cormorant are worth checking out.

The island of Baltra is almost barren save for three species of vegetation. Baltra, however, is not devoid of importance. One of the only two airports in Galápagos is here, newly remodeled and with shops and restaurants. There is also a national military base on the island.

Fernandina is only about 700,000 years old, making it the youngest island in the Galápagos. It is often overlooked by tourists due to its remoteness. The island is home to Galápagos penguins, flightless cormorants, and the largest colony of marine iguanas in the archipelago. Visitors exploring Fernandina should watch where they tread, as iguanas’ nests are scattered all over the island.

Santiago has perhaps the highest number of wildlife attractions in the entire archipelago. The island has a lagoon of flamingos and a fur seal grotto; it is the home of Galápagos hawks and vermillion flycatchers. Thousands of seabirds adorn the spectacular landscape.

Santiago, however, has very limited native vegetation due to the feral goats that once swarmed all over the island. Although the National Park Service already fenced off part of Santiago to keep them away, a lot of goats still roam the region, particularly Buccaneer’s Cove. As its name suggests, this was a favourite hangout of sailors, whalers, and pirates in the 18th and 19th centuries. Its sands are a dark purple-red in colour. It is a lovely place for swimming and snorkeling, if you don’t mind the large and rather unsettling population of goats.