Where to buy property in Fujairah Emirate, United Arab Emirates 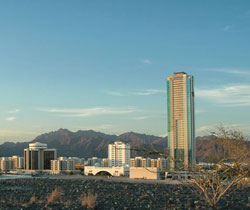 Fujairah lies along the Gulf of Oman, whereas the six other member emirates of the UAE are on the west coast along the Persian Gulf. Its location makes the emirate strategic to the federation, with the Port of Fujairah being one of the area’s major international seaports.

The emirate’s terrain is also unique among UAE members. It is primarily a mountainous place, thanks to the Hajar Mountains of Oman that continue into the emirate. This range separates Fujairah from the rest of the UAE, but it is accessible by land, sea and air, as it has its own international airport.

Fujairah enjoys a little more rainfall than the rest of the UAE, though precipitation is more often than not in the form of hail. Aside from port-based commerce and tourism, the local industries are farming, fishing, cement, stone crushing and mining.

The emirate has some notable cultural and religious institutions, such as the grand 17th century Fujairah Fort, sitting on top of a hill and surrounded by date trees, and the oldest mosque in the UAE, the 15h century Ottoman Mosque. This place of worship reflects ancient Islamic architecture, its four domes sitting on only one massive pillar.

Fujairah is famed as holiday destination, and most real estate construction here has been devoted to resorts instead of residences. The coastline has its share of beach resorts for varying budgets, as well as a hot springs resort. A number of sports and other outdoor activities are enjoyed here, including scuba diving, snorkelling, sailing, and sports fishing. Nature lovers such as bird watchers, campers and hikers would enjoy the protected Wadi Wurayah, said to be the wettest portion of the UAE, with lots of freshwater pools, rivers and waterfalls, and home to indigenous wildlife as well as prehistoric archaeological sites.

Fujairah’s capital city has its share of modern structures, but they do not tower as much as those in Dubai and Abu Dhabi, and they are considerably fewer in number. Fujairah is not as hectic or as cosmopolitan as those other emirates, either, although it is fairly tolerant. Alcoholic drinks are served and sold in places where it is allowed, mostly in hotel restaurants. There a few shopping centres, but the most exciting place to shop in Fujairah is in Masafi, about 20 minutes away from the capital on the road to Dubai. Masafi’s Souk Al Juma, or Friday Market, is actually open every day and sells fresh produce as well as lovely carpets and pottery at good prices (after the traditional bout of haggling).