Where to buy property in Floriana, Malta 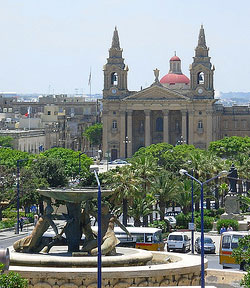 The town of Floriana was named after an Italian engineer who extended Valletta’s fortifications in the 17th century—indeed, Floriana was originally conceived as a fortress complex protecting the capital. Today, it is an administrative and financial centre, the location of ministry buildings and department offices. Floriana also has some luxury hotels, including the venerable and prestigious Hotel Phoenicia Malta.

Floriana has many green, open spaces, including the lush, two-tiered Argotti Botanical Gardens and the Mall, a small garden with statues of famous historical figures. The large St. Publius Church, which commemorates Malta’s patron saint, looms over Granaries Square. The Square is so named because it contains dozens of pits which had been used to store grains in times of war and siege. The pits are covered by caps that protrude from the ground.