Where to buy property in Fejer, Hungary 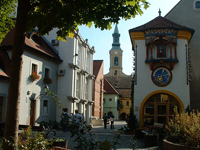 Fej�r is a diverse mix of rolling hills, and sprawling flat lands. �In its centre is Lake Velence, offering swimming, wine-surfing and water-skiing. The 25 square km lake is a protected site for numerous bird species. Nearby is the Bika valley, providing water for the area's only thermal bath.

Fej�r has a rich history. In the Middle Ages, 32 kings were crowned here. Medieval and Roman relics abound.

Sz�kesfeh�rv�r, the county's capital, was the town of King Saint Stephen (founder of Hungary), and many monuments in the area remind us of him. One such popular attraction is the ancient ruins of the basilica of Stephen I, found at the National Memorial Park. Grand pillars and the foundation stones are all that remain. �King Stephen's grave is also here marked with a simple stone block and cross.

Aside from Sz�kesfeh�rv�r's numerous heritage houses, another favorite is the Basilica of the Assumption of Our Lady, once the home of the Hungarian royal crown, and now of the country's archives. �Built on a Gothic foundation, it was rebuilt in baroque style. Its most outstanding feature is its marble-red sanctuary.

Fej�r's countyside is dotted with castles and large manors. The most popular is Bory Castle, built in 1930.