Where to buy property in Far Eastern Federal District, Russia 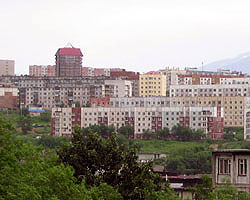 The largest and least populated of Russia's seven federal districts, the Far Eastern District has a population of only 6 million living in an area almost twice the size of India. It is easily one of the world's least populated areas, with a density of only a little more than one person per square kilometre. After the Soviet Union was dissolved, a substantial percentage of the population emigrated, which led to the decline in the district's gross regional product (GRP).

The district is subdivided into 8 republics populated by over 25 ethnic groups, including Russians, Jews, Chukchi, Kamchatkans, Koryaks, Tungus, and Yakuts.

The north of the district experiences extremely bitter winters. Transportation is difficult; the Arctic zones can only be reached by aircraft or icebreakers, and the rivers can be used only during the brief summers, since they freeze over in the winter. When the ground is muddy in spring and fall, it makes even travel by land hard going.

But the cold weather also draws people to gather together indoors in a spirit of warmth and good cheer, and wild flora and fauna of remarkable diversity thrive in this little-explored upper half of the district.

The milder south is more densely populated. It has a modern transportation system, industries, and agriculture. The rest of Russia is accessible to it by railway from the southern area of the district, which includes the Amur and Jewish districts and the major city Khabarovsk. Along its Pacific coast is its other major city, the port and naval base Vladivostok.

The Far Eastern District may be short of residents, but it is home to a great number of natural wonders.

Its landscape boasts cliffs and volcanoes and the famous Geyser Valley of Kamchatka, a six-kilometre-long valley studded with hot springs, volcanoes and nearly 100 geysers or at least that was their number before a devastating mudslide in 2007 flooded two-thirds of the valley, burying most of the geysers and creating a temporary lake where they once were. While the waters have receded a bit since then, and one of the largest and most well-known geysers remain, the natural disaster seems to have changed the face of this area forever. Recently, a new geyser erupted in a nature reserve a few kilometres from the valley, the first new one to appear in the area since the 1960s.

Some rare species can be found in the Russian Far East, such as the Amur tiger, which is the largest cat in the world, and endangered red-crowned cranes. The Arctic wilderness of the northern part of the district is home to a vast number of migratory birds in summer and polar bears and foxes in the winter. Reindeer are herded in the north. Growing wild in this district are ginseng, arctic poppies, and snow buttercups.

From 1958 until 1991, Vladivostok was a closed city, open only to those given official permission to enter it.

It now has 700,000 official residents, including Chinese, Korean, Japanese, and local ethnic minority groups, as well as ethnic Russians. There are also perhaps 10,000 illegal Chinese immigrants here, working in markets and restaurants. The city's name means "Lord of the East", and it is only about 75 miles away from the Chinese border.

This city is on the Pacific coast and is one of Russia's four important seaports, being home to Russia's naval fleet. It is a commercial centre, importing goods from China, Japan, and Korea, including smuggled goods. The US Navy also has a presence here.
Echoing Nikita Khrushchev, some consider Vladivostok a Russian version of San Francisco, with its sharply sloping streets overlooking busy piers and ubiquitous Chinese and Korean stores and restaurants.

Vladivostok struggles with pollution, corruption, and poverty. But the city has experienced a rush of development lately. Due to its location, it could be a major economic centre, were it not for its heavy bureaucracy and ill-maintained infrastructure. Recently, though, the local train station and airport have been renovated. It is becoming more accommodating to tourists and business travellers, with some luxurious new hotels with English-speaking staff.

Attractions include submarine museums, a historic train station, and a neighbouring forest populated by tigers and other rare wildlife. There are nine universities in Vladivostok, including Far Eastern National University. One of the five biggest educational facilities in Russia, it has over 40,000 students.