Where to buy property in Falcon, Venezuela 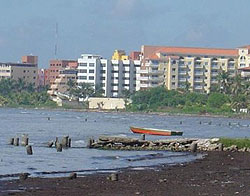 The state of Falcon is the northernmost mainland point of Venezuela and the country’s driest region. Most of it faces the Caribbean Sea. The oil industry reigns supreme here, and it has two of the largest refineries in Latin America, Amuay and Cardón. The state processes about 69% of the country’s crude oil, and about 63% of its refined oil export. Fishing is also an important economic activity.

At first glance one gets the impression that there are more beaches here than people per town, as the state is not heavily populated. The beaches here are varied. Adícora has extensive sand beaches and a sprinkling of hotels and restaurants, Tucacas’ small beaches are covered in mangroves that meet the crystalline waters, and Morrocoy has marine reserves. There are also numerous spas near the beaches.

The state has four national parks: Sierra de San Luis, Morrocoy, Cueva de la Quebrada del Toro and the Medanos. The Medanos is an isthmus that connects the Paraguaná Peninsula to the rest of the state. The peninsula is an important area for the nation as it has many oil refineries, especially in the city of Punto Fijo.