Where to buy property in Eminonu District, Turkey 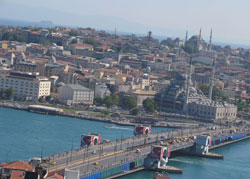 Eminönü is a major commercial hotspot, attracting thousands of tourists, traders, and migrants every year. In fact, it has the busiest ferry crossings along the Bosphorus and the Marmara Sea. Every day, the mainline railway trains are flooded with hundreds of people and so are the district’s buses, boats, and light metro.

Contrary to popular misconception, tourists do not frequent the district solely for its historical Byzantine remains. Instead, they come in search of discount clothing, toys, accessories, handicrafts, antiques, and other inexpensive items. There are no classy shops or huge shopping malls here; what attracts shoppers to Eminönü is the long line of merchants selling their goods along the cramped sidewalks of Mahmutpaşa and the Spice Bazaar.

As an industrial district, Eminönü has many offices and workshops, as well as important government buildings such as the governor’s office and Istanbul University’s main campus. Having no more than 30,000 working-class residents, Eminönü’s housing structures are mostly the type of apartment blocks that are typical in European Istanbul. 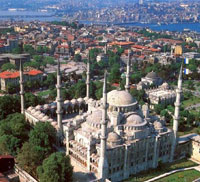 The culturally important area of Sultanahmet in Eminönü was the centre of Old Istanbul. In Byzantine times it was famous for its Hippodrome, the centre of sport and society in the city. This was where people gathered to watch the chariot races and mingle. Today, the Hippodrome is called Sultan Ahmet Square, surrounded by beautiful, landscaped parkland. Facing the square is the stately Hagia Sophia, built by the Emperor Justinian in the 6th century A.D. as the third Church of the Holy Wisdom on the site, after riots destroyed the first two. It is now a museum.

Another important complex in Sultanahmet is the grand, sprawling Topkapı Palace, the home of sultans and the centre of the Ottoman Empire for 400 years.Visitors can take a guided tour of the palace and its grounds. Also near the square is the 15th century Kapalıçarşı, one of the largest covered bazaars in the world. Standing at opposite ends of Sultanahmet Park are the 6th century Aya Sofya Church and the 17th century Blue Mosque.

Sultanahmet’s attraction even extends to the underground. Beneath the square is the Yerebatan or Basilica Cistern, the most impressive of the hundreds of Byzantine cisterns that can be found beneath the city. It supplied water to Topkapı Palace.

To accommodate the vast numbers of visitors to Sultan Ahmet Square and the historic buildings nearby, there are also dozens of hotels, restaurants and street-side cafés in Sultanahmet.

Kadırga is an old residential quarter in Sultanahmet, close to the Marmara Sea. Its old timber houses are classic examples of traditional Istanbul architecture, but sadly many of these houses are crumbling and disappearing. There has been a recommendation to preserve what remains of the houses as a World Heritage site.

Sirkeci is a commercial district in Eminönü. The Ottoman Sirkeci Station was the terminus of the famous Orient Express. It still serves as a terminus regional and international trains.

As a transport hub, Sirkeci has many tourist-inclined facilities. There are modern boutique hotels in restored Ottoman-era buildings, traditional Turkish restaurants, bookstores, shops and tourist offices. The Zeytinburnu-Kabataş tram connects Sirkeci to popular places in Eminönü such as Sultanahmet.

When the large Marmaray rail-tunnel project is completed, Sirkeci Station will be transformed into a museum, and the area’s hospitality facilities will be more developed.