Where to buy property in Embrera, Panama 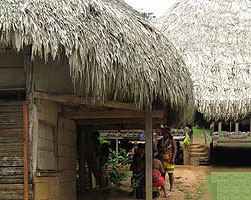 The Embera Comarcas is one of the youngest provinces of Panama. Conceived in 1983, this province is made up of the territories of Pinogana and Chepigana, and is now home to a large Embera population, with some Wounaan citizens as well.

The province is indigenous territory, not easily accessible to visitors. The 17,000 population consist mostly of Emberas and Wounaans, two tribes that share similar cultures, yet speak different languages. These two tribes create intricate tagus carvings from the seeds of the Tagua tree, and these products, along with the tribes woven baskets, have gained popularity in the international market.