Where to buy property in Dubailand, United Arab Emirates

Family-friendly entertainment is the key focus of Dubailand (a prime area), a multibillion-dollar project in the middle of the Arabian Desert. There will be around 50 theme parks, factory outlets, sports venues and desert resorts, and the whole thing is expected to be complete by 2020, though people can move in by 2010. Sports facilities will include Dubai Motor City, Dubai Sports City and Jumeirah Golf Estates.

Dubailand will be set near Emirates Road and will include the Global Village, which is already in use.

There are also residential offerings. One large community, Mudon, will feature traditional Middle Eastern architecture.  Homes in Dubailand will include townhouses, villas and apartment blocks.

Near the Dubailand development, City of Arabia is another multi-billion dollar residential, commercial and entertainment complex, including offices, medical centres and even schools. It is scheduled to open in 2010.

It has four key areas: a large mall, an amusement park with an earth science museum (featuring animatronic dinosaurs) and planetarium, a commercial area on the waterfront, and a complex of residential and commercial buildings. City of Arabia will have its own monorail system within the complex. 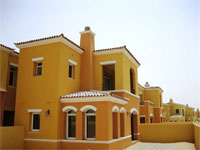