Where to buy property in District XXIII, Hungary 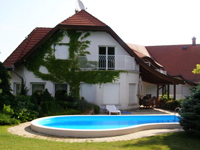 Soroks�r is Budapest's 23rd district, as well as its youngest. In earlier years, it was home to a large Swabic (German) population. Relatively far from downtown Budapest, the area is primarily agricultural.� Many locals still live off the land.

Soroks�r's infrastructure, unfortunately, is in poor shape. The roads are old, and the sewage system is not effective. The Danube is very heavily polluted here.

There are plans to build Central Europe's largest logistics center on 103 hectares of Soroks�r. It will be built by M�v (Hungarian Railways), the Soroks�r administration, as well as Dutch and German investors. It will have a truck and container terminal, a refrigeration plant, gas station, and supplementary services for M�v. �Other plans include the building of apartments near Szentl�rinci Lak�telep, as well as a sports centre.