Where to buy property in District VI, Hungary 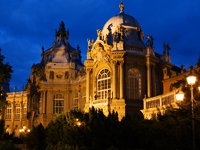 Andr�ssy Avenue's was named after a former prime minister, who did much to make Budapest a prosperous city. The cream of Eclectic architecture is seen on the Avenue, including the outstanding Opera House and many beautiful mansion blocks, with intimate inner courtyards, statues and fountains. The near 2.5 kilometre-long Avenue was inspired by France's boulevards, and originally had a separate lane reserved for gentlemen out riding.

One of Andr�ssy Avenue's special features is barely visible on the surface. The only give-away is the occasional wrought iron balustrade leading underground ... continental Europe's first sub-surface railway is under the road. The 125-year-old underground still carries passengers today, along a line only slightly longer than the original.

This majestic Andr�ssy Avenue leads to the Liszt Music Academy, as well as to the Opera House. The Opera is one of Budapest's most significant 19th century buildings. This neo-Renaissance palace is flavoured with Baroque elements. It was built between 1875 and 1884, the creation of Mikl�s Ybl. The building's exterior is imposing, the interior is breathtaking, and its rich decoration and superb acoustics attract the greatest singers, dancers and conductors from all over the world. The largest social event in Hungary, the Opera Ball, takes place here.

After Oktogon, the museum visitor comes across a vast grey edifice, the House of Terror Museum set up in the former headquarters of the dreaded state police. Inside is a permanent exhibition dedicated to the many victims of fascism and communism in Hungary.

Budapest even has its own Broadway / West End, called Nagymezo utca.Popular with the young and young at heart, the area overflows with bars and cafes that spill out onto the pavement during summer's peak. Unfortunately the area is also loud, and polluted.

If this doesn't bother you, then join the many people who buy homes here. Popular residential areas are places near V�rosliget (City Park), Oktogon Andrassy or the Opera House. Properties in any of these stylish areas can cost a pretty penny. Those looking for more wallet-friendly places need to head towards the side streets. Plain apartments are plentiful, fronted by bars filled with the average working class Joes, having a brewski or trying their luck on the slot machines.

The area is accessible by commute. Nyugati Train station is here, as well as trams.

Ter�zv�ros' numerous streets are lined with sycamores and wonderfully intricate buildings. It has recently gained a reputation for being a first class area to live in, since UNESCO honored part of the area as a World Heritage site.

Tired of meandering? Head on over to the Szechenyi Thermal Baths, a luxurious spa, also claiming the title of Europe's largest spa.