Where to buy property in District V, Hungary 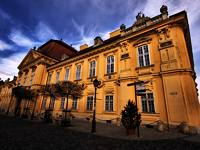 District V (prime area) is the modern heart of Budapest. At one end is the immense brick-and-tiled Vasarcsarnok (main market hall). Moving forward to Lip�tv�ros is an area known as V�ci utca, a pedestrian retail area. This also hosts the district's government buildings, such as the beautiful old Parliament Building, as well as major banks - this is Budapest's financial district.

There are numerous 5-star hotels here, taking advantage of the great view offered by the Danube and Castle Hill. Throughout Szabads�g there are a wide range of shops, as well as restaurants and bars, because of the influx of tourists.

Historical landmarks are at your fingertips in District V, such as the remains of the old city wall of Pest in Kecskem�ti utca, and the beautiful Chain and Liberty bridges.

Traveling around the area is easy, as public transport is excellent. All three of the capital's metro lines have stations here. A tram also travels along the Danube.

Travel slightly south and and you'll hit quiet residential areas. There are old apartments, and newly renovated and modernly-furnished apartments. The priciest properties in the district tend to overlook the Danube.

Belv�ros, which means "city centre", is the core of District V. Belv�ros is the ancient city, on the Pest side of Budapest. It sits on the Danube, and its borders follow the old lines of the ancient city walls. It is usually the starting point for tourists. The luxury hotels are located here, as is V�ci utca, the town's best-known shopping area.

V�ci utca is made up of the central V�ci Street, and the smaller streets that surround it. It is the financial and also the commercial centre of Budapest. Aside from shops and banks, tourist services are situated here, such as travel agencies.