Where to buy property in District III, Hungary 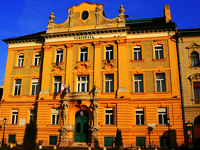 �buda (Old Buda) is the oldest district in Budapest. It is also the second largest. This district was built on top of an old Roman military camp called Acquincum, hence the name.

�buda-Aquincum's heart is in Fl�ri�n t�r. The district administration is here, housed in many old baroque buildings. Taverns abound in this area as well, with a smorgasboard of traditional Hungarian cuisine.

An area of interest is B�k�smegyer. Considerably less flamboyant than many other areas in Budapest, it has plain, large blocks of buildings, typical of structures during the communist era.

The British International School is nearby, catering to children between 3 to 18 years of age.

Once upon a time, �buda was full of boat-builders and silk production factories. Today, it is gaining popularity with the young professionals, and with the rush of extravagant yuppies, comes an influx of trendy commercial establishments. Many bars and fine dining restaurants have started to infiltrate the area.�

Traffic in this area is somewhat of a nightmare, with all these car-wielding yuppies all trying to out-shine each other in status. Though G�d�llo suburbian railway (H�V) passes through the area, as does the metro line terminal, public transportation is not considered trendy, as it is in New York or in Paris.

For history lovers �buda is a treasure trove of well-preserved remains from the Roman period to Baroque bourgeois mansions. There are numerous museums in the area, too. The �buda Museum for example has Hungary's only toy exhibit, while the Zsigmond Kun Flat Museum has a great collection of Hungarian folk art furniture.

In Kiskorona utca, you can fine the ruins of a convent from the medieval period. Also the �budai T�rsask�r, the centre of �buda's cultural life. The street hosts numerous. June to September for example is a popular time for art exhibitions and events. Warm summer months invite theatre performances, as well as jazz and classical music concerts.