Where to buy property in Coquimbo, Chile 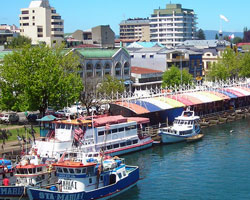 North of ValparaÃ­so is the region of Coquimbo, which lies in a mountainous, semi-arid area called Norte Chico, or Small North. It can get as hot as 34Â° C here in the summer, though the Pacific breezes cool the air.

Coquimbo's top industries are fishing, mining and agriculture, but the beauty of its beaches and the profusion and colour of its regional flora are making Coquimbo a top tourist destination as well. There are three provinces in Coquimbo: Elqui, LimarÃ­ and Choapa, all named after the rivers that flow from the Andes down through their territories and into the Pacific.

The capital of Elqui, also called Coquimbo, is the region's port and major city. Coquimbo's beaches draw crowds in the summer.Â  Some of the most popular are La Herradura, a scenic bay where yachts are docked, surfer-friendly Totoralillo, with its crystal clear waters, and Guanaqueros, popular with fishermen and swimmers alike. The seaport area, which is highly industrial, has been revamped to make it more attractive to tourists.

Coquimbo's architecture is varied and interesting. A famous Cross of the Third Millennium stands in the heart of the city, and there is also a mosque and an Islamic cultural centre, which stand out against the more traditional buildings. It also has an English neighbourhood, the Barrio InglÃ©s.

The capital of the Coquimbo region is also in Elqui. La Serena is a seaside resort city with graceful 19th century architecture. It has a distinctive Spanish Colonial Renaissance style, emphasized by its urban renewal plan.

The city, the second oldest in Chile (after Santiago), has been called "The City of Churches" due to its vast number of centuries-old churches, many made of a distinctive sedimentary stone embedded with shells found near the Elqui River. Appropriately, La Serena is also the seat of Roman Catholic Archdiocese of La Sirena.Â Its cathedral, dating back to the 19th century, has withstood many earthquakes with very little visible damage.

La Serena has many cultural attractions, including some museums and parks and a lighthouse. Of architectural importance is the Plaza de Armas, around which many colonial buildings are ranged.

La Serena's climate is somewhere between the dry desert climate of the Atacama and the mild Mediterranean climate of the central coast. It is coldest here in July and warmest in February.

There is little rain for much of the year, making it very suitable for beach holidays. Because of its incredibly clear skies, the neighbouring Valley of Elqui is home to many observatories as well as vineyards.

The small town of Pisco Elqui is set on top of a hill in the Elqui Valley and has distinctive vintage architecture, with many old houses. It is famous for the Nuestra SeÃ±ora del Rosario, a tiny, charming church with a blue steeple that can be seen for miles around, and for the region's oldest distillery of the local liquor known as pisco. The hill is a favorite among hikers in the area.

The city's name was changed from Union to Pisco Elqui in honour of the drink that made it famous.

The province of Limari is situated in the Coquimbo region. It is composed of 5 communes: Ovalle, RÃ­o Hurtado, Monte Patria, Combarbala and Punitaqui.

Rio Hurtado is a romantic place on rugged mountain slopes. It has a picturesque rural atmosphere, with farming and goat-herding the main industries. The quaint, traditional charm of the area extends to the lifestyles of its locals:Â  women bake their own bread at the crack of dawn each day, while men on horseback herd goats high on the slopes.

However, the "idyllic" traditionalism partly reflects Rio Hurtado's impoverishment, and the commune has seen much emigration over the years.