Where to buy property in Churchgate, India 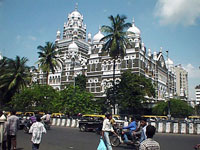 This area is named after one of the three gates Mumbai had, when it was a walled city back in the 18th and 19th centuries. It is mainly a business district, but Marine Drive (prime area) is its up-market residential area. The road links Nariman Point to Babulnath and Malabar Hill. Marine Drive buildings are generally low-rise and many of them were built in the 1920s and 30s in the Art Deco style.

Marine Drive is also called The Queen's Necklace, because when viewed from an elevation at night, the lights appear to be in the form of a necklace.

There are a number of high-end hotels and restaurants along Marine Drive, including the superb Taj Mahal, the 5-star Oberoi, the Intercontinental and the Hotel Marine Plaza.

Real estate prices along the esplanade are among the highest in India. A lot of celebrities live here, making it one of India's premier residential communities.

Marine Drive is a busy road but proximity to the business district, clubs, restaurants, train stations and entertainment puts a huge premium on the value of property making it among the most expensive real estate in the world.