Where to buy property in Chimborazo, Ecuador 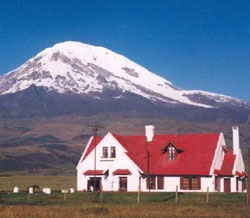 Chimborazo is called Ecuador’s heartland, being the central province of the country’s Andean highlands.

The province is named for the country’s highest mountain, which was worshipped by its locals as god. If measured from the centre of the Earth, Chimborazo is the highest peak in the world, since the region is crossed by the equatorial line where the Earth is wider. The very tip of Chimborazo is the point on Earth that is the farthest from the centre of the Earth. Chimborazo has drawn adventurers to its steep, snowy slopes and has served as inspiration to writers and artists.

The biggest indigenous population in the country can be found in the dry-cold province of Chimborazo. Many of its locals still follow their traditional ways of life, although they have mixed their shamanic beliefs with Catholicism when it comes to religion. A lot of Chimborazo’s locals are excellent mountain guides.

The Chimborazo Wildlife Reserve surrounds the mountain and contains another peak, Carihuairazo. Within the reserve you will find endangered Andean animals such as alpacas, llamas, and vicuñas. 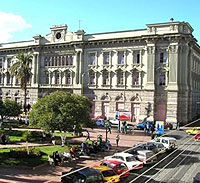 Chimborazo’s capital, Riobamba, is the historic site of the signing of the new Republic’s First Constitution when Ecuador separated from Gran Colombia.

Even today, Riobamba has not shed its Spanish influence. Its parks and arcades strongly reflect distinct colonial styles. Many of its old colonial houses are still standing, but they are now quite rundown and shabby, and many of them house cobblers’ shops, barbershops, and other small businesses.

The Santa Barbara Cathedral is worth visiting for its noteworthy stonework, but the main religious attraction of Riobamba is the the Convento de la Concepcion, which keeps the most opulent, gold-encrusted, gem-studded monstrance in South America.

Riobamba has what is perhaps the most exciting train ride in Ecuador: the Devil’s Nose track, which is an impressive engineering feat consisting of a series of zigzags designed to get the train through the steep slope. The most fantastic view of the Andes is from the train roof, so be sure to obtain a secure spot for the most exhilarating train ride of your life.

Ten minutes away from Chimborazo’s capital, Riobamba, is the small handicraft village of Guano. Wool weaving, carpets, rugs, and cottage building are the town’s main industries. Guano offers a splendid view of the peaks of El Altar, Chimborazo, and Tunguruhua.

Punin is a bone digger’s dream: a wealth of prehistoric artefacts have been exhumed in the area, including 10,000-year-old animal fossils and human skeletons in Punin’s Challan gully. The town has a fascinating paleontological museum that is well visited not only by scientists and students of archaeology but also by regular visitors.

If you like fishing and hunting, then Chunchi, whose name means “red dawn”, is the place to be. Nearby Cajabamba is also an interesting place to visit, with its early colonial houses and churches. The oldest Spanish church in the canton is in the district of La Balbanera.