Where to buy property in Centrum, Netherlands

The heart of Amsterdam is right here—the very centre of the city, one of the most famous (and notorious) places in the world. There are 82,000 people living in Centrum (a prime area), and there is a hive of activity everywhere you look.

The Old Centre (the centre of Centrum) is similar to the rest of the city in that it is packed with bars, restaurants and cafés, and marked by canals and waterways crossed by humpbacked bridges. And the core part of the Old Centre is Dam Square, which is in fact a rectangle. Tourists can reach it from Central Station by going straight down Damrak Street.

The biggest tourist draws here are the Royal Palace, which has been the royal residence for 200 years; the Gothic New Church, which is in fact 600 years old; the Nieuwmarkt, whose biggest attraction is the De Waag castle, which houses the Amsterdam Historical Museum; and the National Monument, a stone pillar honouring the dead of World War II.

The Centrum’s most well-known area is called the Rossebuurt, and consists of Singelgebied, Ruysdaelkade and De Wallen (or Walletjes)—but it is known all around the world as Amsterdam’s Red Light District. The country’s designated area for legal prostitution, the Red Light District has become a magnet for tourists and locals alike.

The most distinctive sights in Rossebuurt are the windows where prostitutes wait for customers under a red light. Photographing the women is frowned upon, which camera-toting tourists must keep in mind if they don’t want to be chased away. They are also advised to avoid dealers who sell drugs on the street.

While mainly known for its sex shops, sex theatres, brothels, and prostitutes’ rooms, the Rossebuurt also has other attractions. Some seem incongruous in such an area, such as the beautiful Gothic Oude Kerk, the oldest church in the country, and a Buddhist temple. There are also cafés and restaurants here.

In recent years the local council has decided to change the area’s image and rent out places to up-and-coming fashion designers as studios and showrooms. Windows that used to feature women now showcase mannequins.

Not far away is  the Grachtengordel, a semicircular girdle of canals that forms an entire residential and commercial district. The district’s three main canals (Herengracht, Keizersgracht, and Prinsengracht) were built in the 17th century, and around them have sprung up many large houses. The most famous of these is Anne Frank’s House, where the young diarist and her family hid during the war. But Grachtengordel as a whole qualifies as a tourist attraction. Looming over the Herengracht is the Golden Bend, a line of mansions from the 18th century. And the street known as Raadhuisstraat takes you to the city centre but entices you with shops and boutiques along the way.

Jodenbuurt, or the Jewish Quarter, is one of the quieter corners of Amsterdam. Founded by Jewish immigrants in the 16th century, Jodenbuurt tragically lost many of its residents during the Holocaust, and has never quite recovered since. Today, people go to Jodenbuurt to visit the Sephardic synagogue, the Jewish Cultural Museum, the Holocaust memorial that now stands in Hollandsche Schouwberg (once the site of Jewish theatrical performances) or the Rembrandthuis, which houses many of the great artist’s works.

Jordaan started out as a neighbourhood designated for emigrants and the working class in the 17th century, and turned into a slum as more and more people moved there over the years. But as with many Dutch districts, it has undergone an urban renewal in recent decades.

Today, Jordaan is quite bohemian, popular with students and artists, and trendy as well. Luxury boutiques and expensive restaurants line the narrow, twisting streets of this welcoming corner of Amsterdam. Despite the slightly cramped quarters, many houses have small gardens that lend colour and vibrancy to the view. Tourists have also discovered Jordaan, and almost every building has a shop, a café or a restaurant on its lower floor.

Housing in Jordaan is an interesting mix of lower-value housing for artists and students, and more expensive older houses owned by wealthy Dutch.

Sitting on reclaimed land, the Spui is an open square in the middle of Amsterdam. Cafés, shops, bookstores and galleries open out onto the square, in the middle of which stands the Het Lieverdje, the statue of a boy who represents the youth of the Netherlands.

The Spiegelkwartier is the place to go if you’re interested in antiques or art. More than 70 antiques shops are found in this quarter, which has been the centre of the trade in the Netherlands for more than eight decades. Anything old and precious, from Delft pottery to glass to oriental and Art Nouveau pieces, can be found here. Shoppers can relax after the day’s hunt in the cafés that also abound in this area.

Another place to visit in the Spiegelkwartier is the Rijksmuseum, which houses a magnificent collection of paintings from the country’s Golden Age, including the works of the great Dutch artists Rembrandt and Vermeer.

The Plantage (“The Plantation”) is a green area next to the Grachtengordel. Here you can visit the Hortus Botanicus, a beautiful, 330-year-old garden that grows exotic plants from the East in its greenhouses, and the Artis Zoo, the first zoo in mainland Europe and one of the oldest zoos

The Leidseplein is the centre of the city’s nightlife: it has not just the usual array of bars, restaurants, and cafés, but movie theatres, nightclubs and street theatre as well. Performers—jugglers, clowns, fire eaters and buskers—entertain diners at outdoor tables, and henna tattooists leave their temporary mark on tourists and sightseers. 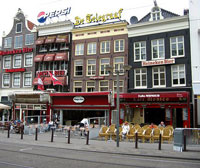 Once a butter market, the Rembrandtplein is another nightlife centre, in close proximity to many hotels and studded with bars, nightclubs, cafés and restaurants. A large statue of Rembrandt now stands in the centre of the square. Beneath it are smaller figures recreating part of his famous painting Night Watch.

Rembrandtplein also has a gay scene that’s big even in gay-friendly Amsterdam. Along several streets in the neighbourhood are stores, bars and saunas that cater to the gay population.

Flanking the river IJ, and also known as the IJ Waterfront, are the Westelijke and Oostelijke Eilanden, or the Western and Eastern Islands. There are three islands in the west (Bicker, Prince and Real) and another three in the east (Kattenburg, Wittenburg and Oostenburg). The islands are connected to each other by drawbridges. At present, the waterfront features a lot of shipyards and warehouses. However, the area is undergoing renovation, and will be reborn as a business district with office towers and apartment buildings.