Where to buy property in Centro Norte, Ecuador 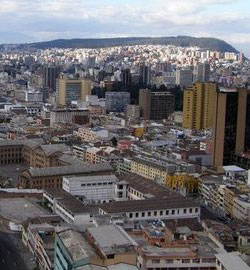 Quito’s central parish has an economy driven by agriculture and eco-tourism. Centro Norte’s natural resources include cloud forests and volcanoes away from its upmarket urban areas.

The monument known as the Mitad del Mundo marks the line of the equator that divides the world into the north and south hemispheres.

A fraction of Calacalí’s 4,500 locals either work or study outside the parish. Agribusiness is the motor of Calacalí’s economy, including cattle-raising. Eco-tourism to the Yunguilla Cloud Forest, with its organic farms and Inca trails, and the crater of the extinct Volcán Pululahua are also a source of income for the parish. Other interesting sites are the Carlota Jaramillo Park and Museum, which honours the memory of one of Ecuador’s great performers, and the 17th century Cross of Stone in the parish cemetery.

Nono is an agricultural and stockbreeding area. It also thrives on tourism and has in employment a good number of native tourist guides. The parish has three protected areas, namely the Verdecocha, Yanacocha, and Pacaya Reserves. Other local wonders include the Cavern of the Virgin of Alambi, where the shadowy image of the Blessed Virgin is depicted on its stone, and the double cascades of the Guagrapamba Waterfall. The parish church and town square are also worth a quick visit.

Pomasqui, otherwise known as the “land of the pumas”, has a number of attractions for its tourists, such as the beautiful Paseo Simon Bolívar, which is flanked by fine colonial buildings and which leads to the church and the central park; the small Chapel of the Mystic Rose, built from volcanic stone; and the Monastery of Convalescence, named so due to its curative natural waters. Grapes and guavas are the main fruit products of the parish.

San Antonio holds the reason why Ecuador is Ecuador: here is where one finds the famous line that demarcates the Earth’s Northern and Southern Hemispheres.

It is marked, at latitude 0-0-0, by the Mitad del Mundo (Middle of the World), a 90-foot stone monument that is topped by a sphere that represents the Earth.

It provides one of the best photo-ops the planet has to offer: a snapshot of you with one foot in the northern hemisphere and the other in the southern hemisphere. It might be a picture that virtually every visitor to the monument has taken, but that only means that you become part of an elite club  of people who can claim to be in both hemispheres at the same time.

The monument is part of a complex that has within its confines a planetarium, and an ethnographic museum. Inside the monument itself is another museum displaying items of Ecuadorian culture. Other attractions in San Antonio are the 2.5 mile-wide Pululagua crater, the widest in South America; pre-Columbian fort ruins, Intiñán Museum, which has demonstrations relating to San Antonio’s special status as the Middle of the World. Good restaurants and hotels are definitely not lacking the parish.

Cotocollao is mainly a residential area with one active commercial zone, along Avenida de La Prensa. It is one of the biggest parishes of Quito and also one of the most commercialized. This urban parish has an odd mix of old and modern buildings. It has the Rodrigo Paz Delgado Stadium, the home stadium of a major football club, and the Aurelio Espinoza Polit Library, which contains one of the most complete collections of Ecuadorian books. 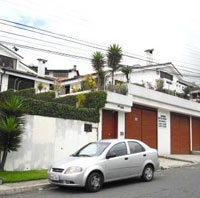 Quito Tenis is an exclusive neighbourhood within the upscale district of El Condado in the north. Many diplomats live here, but the property values are not as high as one would think. Quito Tenis has light to nonexistent traffic at night, making the area generally safer than other expat communities.

Low-rise apartment buildings are replacing houses in Quito Tenis. Many apartments and houses here have magnificent views of Cotopaxi and Pichincha’s peaks.

Hospital Metropolitano is only ten minutes away by car, while the El Bosque shopping mall is only a two-minute drive. Superstore Megamaxi is also located in Quito Tenis. There are three small parks and two mini-markets here.