Where to buy property in Centro, Ecuador

The Quito parish of Centro is, of course, the centre of the city. And its heart is the Centro Histórico, the best-preserved colonial district in South America. It is a quarter of such historical and cultural richness that Quito was the first city to be named a World Heritage Site. 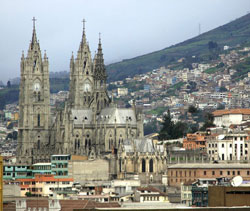 The ancient and historic do not take a backseat to modernity and progress in Ecuador. The best-preserved colonial district in South America is in Quito: the Centro Histórico, alternately called Old City, Old Town, and Old Quito. It is the safe keeper of South American heritage and culture, the primary reason why the city became known as a great reliquary of South American art. The capital got the UNESCO nod of approval and was declared the first World Heritage site in 1978.

Centro Histórico is the very spot where the ancient city of Quito was moved and re-founded by Spanish conquistador Sebastian Benalcazar on December 6, 1534, after Incan chief Rumiñahui burned it to the ground as an act of resistance. Benalcazar named the new city San Francisco de Quito.

Not long after the occupation of Quito the Spaniards established an art school to teach the indigenous people European art movements and architectural styles. Thus the Quito School was born.

The priceless contributions of this famous group is what made UNESCO recognize Quito as a world centre of art and culture. A walking tour of the old district will show you the strong Hispanic provenance of much of the architecture, but what you’ll also notice is that the churches are not purely Spanish colonial in style. Catholicism might have made the Incan custom of polygamy a taboo, but converted Ecuadorian natives practiced it in a non-institutional way by way of artistic expression. 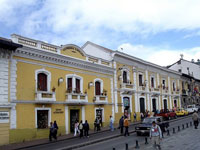 This has resulted in a harmonious pastiche of Spanish, Italian, Moorish, Flemish, and indigenous influences, as reflected in the impressive façades and rich interiors of Ecuador’s oldest churches—the Monasterio de San Francisco, La Compania de Jesus, San Agustin and Santo Domingo. All churches save for La Compania have their own museums displaying art from the Quito School. But La Compania de Jesus is very special too—it is considered by Quiteños to be the most beautiful church in the country, with its intricate gold work that required seven tons of real gold to finish.

Not only houses were turned into museums. The San Juan de Dios Hospital functioned as a medical institution from 1563 to 1973. It was restored and converted into the Museo de la Ciudad, which depicts the social history of Quiteños with its dioramas and models of homes.

The art aficionado better not miss the Museo de Arte Colonial, a restored 17th century building northeast of Plaza Independencia. Regarded by many as Quito’s premier museum, it showcases Ecuador's best collection of art by the more prominent members of the Quito School.

A trip to the old town is not complete without a visit to El Panecillo. The round, smooth hill—it got its name because its shape reminds one of a rounded piece of bread—rises over the city. And looming over everything else it is the majestic statue of the Apocalyptic Virgin of Quito—the only version of the Virgin Mary that is depicted with wings. Never go uphill by foot; you might be preyed upon by robbers waiting for those who dare to trek its steep slopes. Instead, take a taxi to the top.

Other attractions not to be missed are the district’s numerous plazas. Plaza Independencia, informally known as Plaza Grande, is the Old Town’s main square. It is bordered on all sides by important buildings—the City Hall, the Government Palace, the Archbishop’s Palace and the Quito Cathedral. 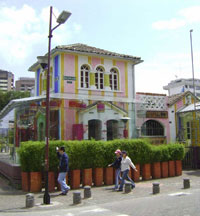 Old Quito is also a place to shop, relax and enjoy great entertainment. Shops, cafés, courtyards, and art galleries line the district’s cobbled streets. The most prominent of these paths is the pedestrian street known as La Ronda. Once an exclusive area, it became the home of bohemians and artists, then fell into serious disrepair. Recently renovated, La Ronda is again the centre of attention, with its art galleries, cosy restaurants and corner shops.

A variety of restaurants in the Centro serves traditional Ecuadorian dishes, healthy Mediterranean fare, vegetarian food and gourmet Spanish cuisine. An old family-owned ice cream parlour that makes the best helados in Quito is one of the district’s treats. Many of the Centro’s bars and restaurants feature live mellow Cuban music and Latin jazz.

Souvenir shops abound in the town’s major streets. Popular local arts and crafts markets include the Tianguez in Plaza San Fransisco, El Quinde in the Plaza Grande, and the Mercado Ipiales where you can buy cheap imported goods such as clothes, shoes, and electrical appliances. First-class hotels and sophisticated theatres such as Teatro Sucre and Teatro Bolívar can also be found in this old, charming part of town.

The main attraction of this urban parish on a hill is the large iron and glass building of the Itchimbia Cultural Centre. Itchimbia lies to the east of Old Town, and from the building is a breathtaking view of northern and central Quito.

The hillside complex holds exhibits and workshops and has its own restaurants and cafés where you can watch the sunset on the mountainside and the Old Town’s floodlights. It has a nice, green park maintained by an environmentalist corporation where you can take your family for a picnic on a balmy day. On a clear night, you can go stargazing at the Quito Observatory, the oldest observatory in the continent, within Itchimbia’s sprawling Parque La Alameda.