Where to buy property in Centre, Latvia 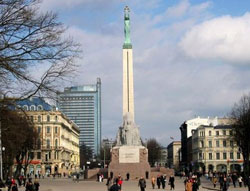 The central district of Riga (a prime area) is admired for its lovely historic neighbourhood, Vecrīga (Old Riga). This old town area features cobblestoned streets and 19th-century buildings, most of them found along the Brivibas Bulvaris (Freedom Boulevard), a pedestrian walkway. Art Nouveau architecture is well-represented in Vecrīga, offering a breathtaking change from the drab Soviet-era flats of the surrounding urban landscape. Notably, you will find Jugendstil buildings designed by the architect Mikhail Eisenstein on Alberta and Elizabetes streets.

Also in Old Riga is the Doma Laukums (Cathedral Square), which is named after its landmark, the Riga Cathedral with its striking clock tower. This Protestant cathedral is acknowledged to be the largest medieval church in the Baltic states.

On the southern edge of Cathedral Square you will find the beautiful Great Guild building, or House of the Blackheads. Originally built by a German merchants' guild in 1354, it has been renovated many times; in 1697, it was decorated with a stately Baroque façade, and in 1853, it was enlarged. Today, the Great Guild building houses the concert hall for the Riga Philharmonic Orchestra.

Another notable Vecrīga building is St. Peter's Church. Originally built in 1209, the Gothic church has been much refurbished since, the most recent restoration taking place in 1973. Before World War I, St. Peter's held the distinction of being the highest wooden structure in Europe. Nowadays you can take an elevator up its tower for an excellent view of the city.

The Central Market, or Centraltirgus, found by the central rail station, is a short walk south from the Old Riga neighbourhood. It is an interesting place to visit even if you don't need to buy anything. The market is constructed out of former zeppelin hangars that had been operated by the Germans in the 1930s. It is a colourful, lively trading pavilion where you can purchase meat, dairy, bread, and fresh produce.

The café society in central Riga is quite exuberant, and locals will tell you that the best cafés in the Baltics can be found here. There is indeed a great preponderance of excellent cafés, alongside a number of tea houses and bars. Central Riga's bar scene is very lively, in fact, and the boisterous partying that goes on has led to area's nickname of the "Bangkok of the Baltics."

South of Old Riga you will find the neighbourhood of Maskavas Forštate ("Moscow Suburb") lying along the right bank of the Daugava. Locally, most people refer to it as Maskachka. Historically, this area was largely occupied by Russians and Jewish merchants, as both groups were once barred from residing in Riga city proper.

During World War II, it was designated as the "Riga Ghetto" by the Nazis, who forcibly required Latvian Jews and relocated German Jews to stay in this area. Most of them did not survive the war. They are commemorated by a stone memorial marking the former site of the Jewish synagogue in which they died.

Maskavas Forštate has its share of early 20th-century Jugendstil manors and traditional 19th-century wooden buildings, although many of them are in a state of disrepair. The suburb happens to sit alongside a major highway; thus, old-fashioned and run-down Maskavas Forštate actually has a section of road lined with glitzy shopping arcades as well as the LIDO Recreation Centre, a large amusement park.